Lower-Case Letters and Classroom Comics Use 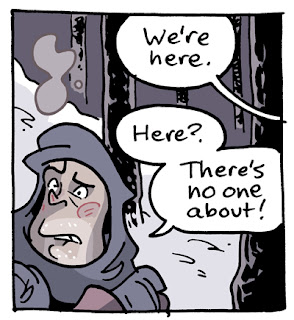 Like a lot of people making comics, I find myself bridging distinct and in some ways mutually exclusive demographics.  One the one hand, the Crogan Adventures has its direct market audience, the folks who pick it up at comic shops or conventions.  These are the people with whom I most regularly interact, and with whom I have a great deal in common, because I’m as much a fan of the medium as they are, so I try to make sure that the work I do and the manner in which I go about doing it will satisfy them as much as the work of other comics creators satisfies me.

On the other hand, I have schools.

In trying to craft a series that meets my own expectations of historical accuracy, I’ve been lucky to find that there are a number of teachers and institutions that have made use of the book for classroom purposes.

Comics in schools are in much the same state that comics in libraries were twenty-odd years ago.  Thanks to the tireless work of cartoonists like Jeff Smith and ColleenDoran to expose their and others’ work to the library community, and to a handful of enthusiastic and courageous librarians, the reluctance of that audience to accept comics as a valid and exciting and unique form of literature has eroded away in all but the most recalcitrant arenas.

Schoolteachers and administrators attempting to implement the use of comics now face similar opposition from their more structurally conservative factors, but they have made tremendous progress in demonstrating the incredible literacy benefits that comics offer.  Papers and articles and studies continue to be presented, and most recently the common core guidelines strongly recommended the use of comics in the classroom.  Within the next decade I would be surprised if comics aren’t a standard part of most school curriculums.  But there’s another obstacle that comics face regarding their use in a classroom setting: lettering.

I first encountered the lettering issue shortly after my first book, Crogan’s Vengeance, came out.  I was doing a workshop for a large group of teachers, and afterwards a number of them were buying copies of the book for classroom use.  I felt I’d made a good case for the benefits that comics provide, but some of the teachers, looking at the books, noted that the lettering was all in upper-case.

Upper-case lettering in comics has been the industry standard since its inception (an inception that is under perpetual debate, though I fall into the conservative historical view that comics as we consider them began with Richard Outcault and Rudolph Dirks rather than earlier “like” comics work or the masterful experimentations of Toppfer).  The reason for this is simple enough – when lettering was all done by hand, it was MUCH easier to draw the two guidelines necessary for upper-case lettering than it was to draw the four required for upper and lower-case.

Growing up, all of the comics that I read were lettered in upper-case (I did not stumble across Tintin until college).  Even after the majority of comics began to be lettered digitally the use of all upper-case lettering continued.

So the teachers mentioned it, which surprised me.  It never really crossed my mind as being unusual.  I was told that, in literacy studies, upper and lower-case letters have consistently proven much easier to read than all upper-case.

This has come up again and again.  Any time I speak with school groups (not children, but educators), the issue of upper-case lettering finds its way into the conversation.  And it seems to be the one factor that even books ostensibly designed for the school market regularly ignore, or choose to actively fight against.  I’ve always been a proponent of the latter.

In addition to the historical precedent, there is an aesthetic quality to upper-case lettering that I prefer.  It creates a solid block of text, which fills the white space inside a word balloon uniformly, giving it the appearance of a graphic element akin to a pattern more than a block of text, which is what it is.  One can have his or her cake and eat it to, so far as the marriage of art and writing goes.

And it is for this reason that, despite the inherent hypocrisy of regularly touting the qualities which comics have that encourage literacy development and comprehension while ignoring a factor that prevents such positive effects from reaching their full potential, I have refused to deviate from the traditional upper-case mold.

Near the end of last year I created a Crogan Adventures story for TheGraphic Textbook (this story was also included in Oni Press’s Free Comic Book Day 2013 offering).  When the story was finished, there were a handful of minor editorial alterations requested that I immediately implemented (I find that editorial acquiescence makes future work with a given editor much more likely), save for one – they wanted me to reletter the story in upper and lower-case. 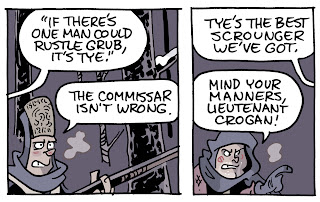 I wrote back a list of reasons for why upper-lower was not necessary.  Surely the other literacy benefits provided by the medium would more than equalize any deficiency that all uppers would create in the reading comprehension.  It’s nicer aesthetically!  A hundred plus years of comics tradition must be maintained!

The Graphic Textbook editors would have none of it.  “This is intended specifically for classroom use,” they said (I’m paraphrasing, of course).  “Therefore it must meet the requirements of a classroom.”

And you know what?

The teachers whom I so eagerly applaud for how actively they champion my and others’ comics for classroom use find themselves hampered by my unwillingness to bend on this point.

So it comes to an either-or question of priority.  Either I can continue using upper-case for its aesthetic and precedential reasons and please myself (for I doubt anyone else would care), or I can accept that upper and lower-case lettering will make it easier for teachers to justify the use of the books in a classroom setting to both themselves and anyone who might be reluctant to consider a medium only beginning to find widespread acceptance in educational circles.

The whole reason that I approach the books with the intent of making them suitable for all ages (though they are, in fact, written with adult readers in mind) is so that they might have the chance of being a gateway for some kid to discover the comics medium (plus all the history and genre stuff that I love).  I work hard to ensure that the story reads plausibly and is exciting to an adult reader, but I work twice as hard to make sure that it does so in a way that would not be objectionable to a parent who finds his or her youngster book-in-hand.  If my goal here is to allow for the chance of a wider audience, of more readers – and what’s the point of making the books if they’re not going to be read? – then it’s in my best interest, and the interest of those educators who are kind enough to consider the book a worthwhile addition to their curriculum – to use upper and lower-case. 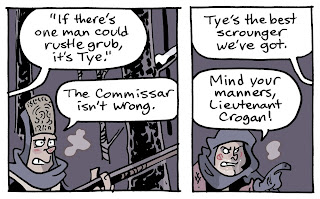 So that’s what I’m doing.  It means teaching myself to letter again – upper and lower requires a different set of decisions and skills (does a line with no ascenders below a line with no descenders require a decrease in leading size to account for the block of white space that would otherwise accrue?), and they are skills that will likely take some time to develop.  And, in all truth, I’m pretty grouchy about the whole thing.  I don’t like it.

Hopefully I’ll warm to it, the same way I did to recycling or not eating Hot Pockets.  I’m reluctant, but I believe that it’s the right thing to do.

Given that some folks pay meticulous attention to changes in comics that they like (I’m one of them!), I thought it worth taking the time to explain the motivations.  I hope I’ve done so!

Posted by Chris Schweizer at 9:17 AM