This was an early pass at a troll design for the next Creeps book, Internet Trolls, basically an alligator head with ears and tusks.  I've moved in a different direction, and as such feel free to share it now!

Posted by Chris Schweizer at 10:55 AM No comments:

Email ThisBlogThis!Share to TwitterShare to FacebookShare to Pinterest
Labels: The Creeps

Ten Books that Stay With You

My friend and former student Liz Enright challenged me to that ten-books-that-stayed-with-you thing.  So here's a handful!

The Hollywood History of the World, by George MacDonald Fraser
Fraser’s critique of period/historical films, how the measure up with real history, how they measure up as movies, and when it’s okay for the former to stray for the betterment of the latter is my moral compass for dealing with historical fiction.

Women and War, vols 1 & 2, by Bernard A. Cook
I was dismissive of the idea of black history month, women’s history month, etc, when I was younger, not understanding why folks weren’t just ingrained into regular history lessons.  It wasn’t until I was an adult that I found the problem.  I’d read probably two or three dozen books about the American Revolution that never touched on the black experience outside of the context of slavery, and it wasn’t until (at the request of one of the editors of my study guide) I went actively looking for that information that I found tons of stuff about the black loyalists, which served as the basis for an admittedly clunky short comic that I did in 2012.  I was really pretty shocked – how was this stuff not included in any of the general histories, many of which were long and expansive works?
The same thing was the case with women in their role in history, especially warfare.  Cook’s encyclopedia is a great jumping off point to many women who did extraordinary things but who are largely ignored in history books, and provides great references and bibliography by which one can find the primary and secondary sources for each entry.

Don’t Know Much About the Bible, by Kenneth C. Davis
The first book I ever read in which the historical, social, and literary contexts of the Bible are addressed, even though content is the book's key focus.  I grew up in an area where biblical literalism (by my reckon an extremely short-sighted theological stance that passed its one-hundredth birthday earlier this decade) held a lot of sway, but which kind of falls apart on critical consideration… or at least, it did for me, and did for many of my friends.  Seeing how the church's interpretation of faith changes radically from generation to generation is what allowed me to keep mine.

The Synonym Finder, by J. J. Rodale
It might be weird to put a thesaurus on the list, but this is one heck of a thesaurus.  The first time reading it gave me a glimpse into the nearly limitless sea of words that I’d always taken for granted.  I know folks who read the dictionary, but the dictionary sucks, it’s like 90% plants.  The synonym finder gives you all the good stuff without the chaff.

Marvel Masterworks vol. 1: The Amazing Spider-Man issues 1-10 (and Amazing Fantasy #15)
I got this book as a kid, probably eight or nine years old.  The crux of Spider-Man’s origin story isn’t the radioactive spider thing, it’s this: He saw a robbery and did nothing to stop the robber.  That robber later kills his uncle, the man who raised him.
That stuck with me hard as a kid.  Inactivity equals responsibility is what I took away from that, and I believe it.  If someone, say, is driving at night without his or her headlights on, and I don’t flash my lights to alert them to that fact, then I am responsible for any accident that they might get in.
Though there’s a hypocrisy to it, this idea pretty much only applies to my day-to-day interactions.  If it were a real driving force for me, I would be somewhere doing something selfless instead of sitting around drawing comics.  I love drawing comics, but it’s not giving anyone fresh drinking water.

Under the Black Flag by David Cordingly
The first nonfiction history book I ever read for fun as an adult (probably 20ish).  Cordingly’s book did something important for me – it argued that our popular conceptions of history are often rooted in fact (in this case, pirates wearing striped shirts or having parrots) that becomes such a part of the stereotype/cultural impression that we begin to think that it must be wholly fictional, a cartoon.  This sort of notion carries to many different periods and identities, and it’s important to keep in mind before stripping away the genre conventions when those genre conventions are often deeply rooted in history.

On Writing and Dance Macabre by Stephen King
I’m lumping these two together because it’s tough for me to distinguish them in my head.  These were the first books-about-making-stories-by-a-storyteller that I read, and they’ve likely had no small impact on me.  I’m a sucker for the applicable criticism memoir genre, and these are two of the best.

The Wordy Shipmates by Sarah Vowell
Vowell’s joy in examining both the merits and deficiencies of the puritans of New England underlines something often lacking in history – a gleeful enthusiasm for the subject and a refusal to use said subject to illustrate a stance.  Vowell approaches her subjects as people.  They may be jerks sometimes, but they’re good sometimes, too.  You get the feeling like she’s talking about her relatives, which, in a way, she is.

King Solomon’s Mines by H. Rider Haggard
I read this 1885 novel in college and found it to be one of the most propulsive and gripping adventure yarns I’d ever gotten my hands on.  It got me hardcore into late 19th century history which got me into history in general, and sent me on a mad dash to read as many old swashbucklers as I could get my hands on.

See Through History: Medieval Knights
This is a kids picture book that I stumbled across as a sixth grade social studies teacher.  I’d more or less forgotten about it for a few years and when I found it again it served as a reminder that great info can be found in unexpected places.  A score of history books for adults might not yield as much usable visual info as one well-done picture book for kids with a top-notch research illustrator.
Posted by Chris Schweizer at 10:39 AM No comments: 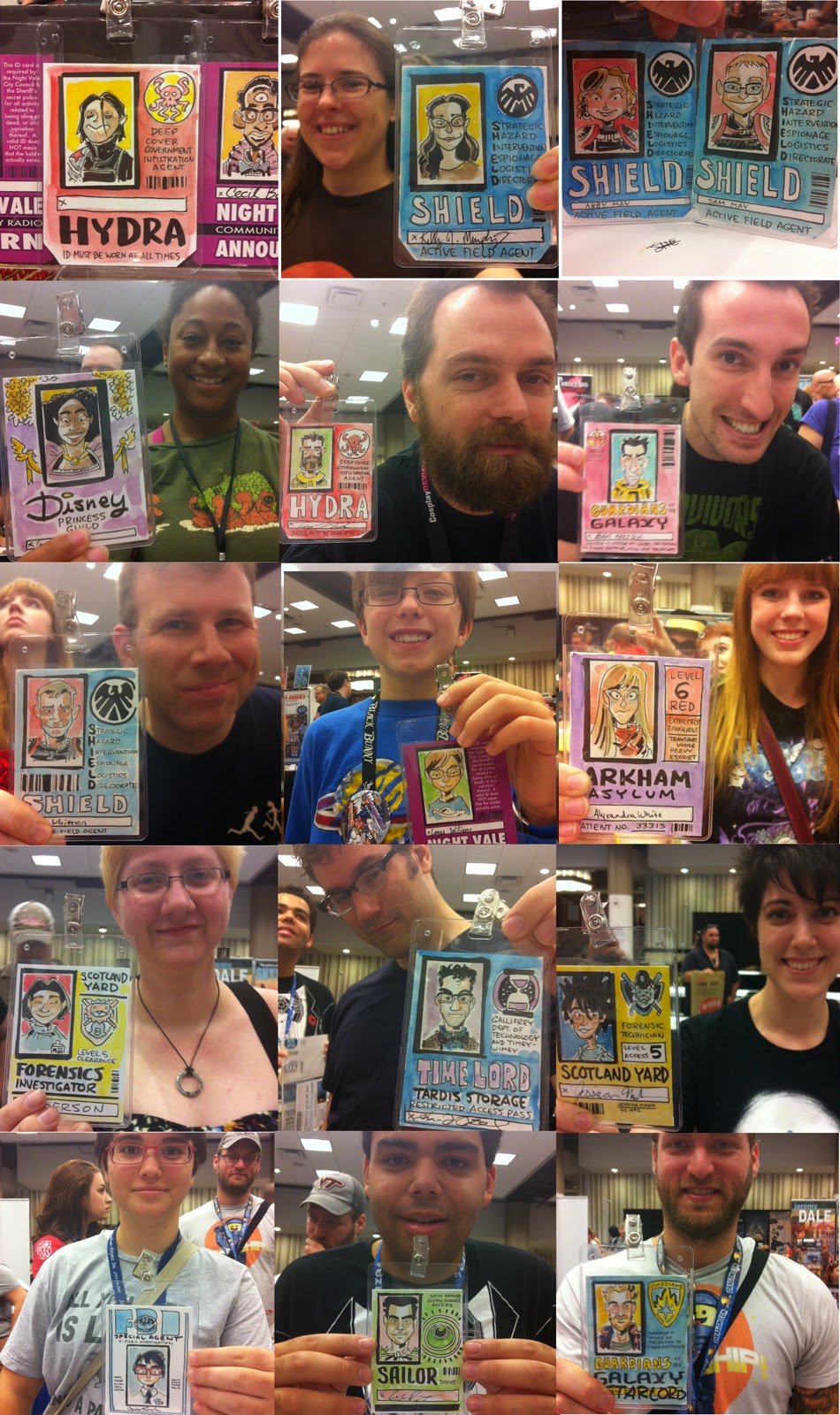 So I drew a bunch of badges this weekend at DragonCon, which is great fun because it lets me stare at people's faces while I draw them. Usually (airports, subway, etc) I have to pretend that I'm not staring at the people I'm drawing. These aren't all of them, but it's a pretty good sampling. 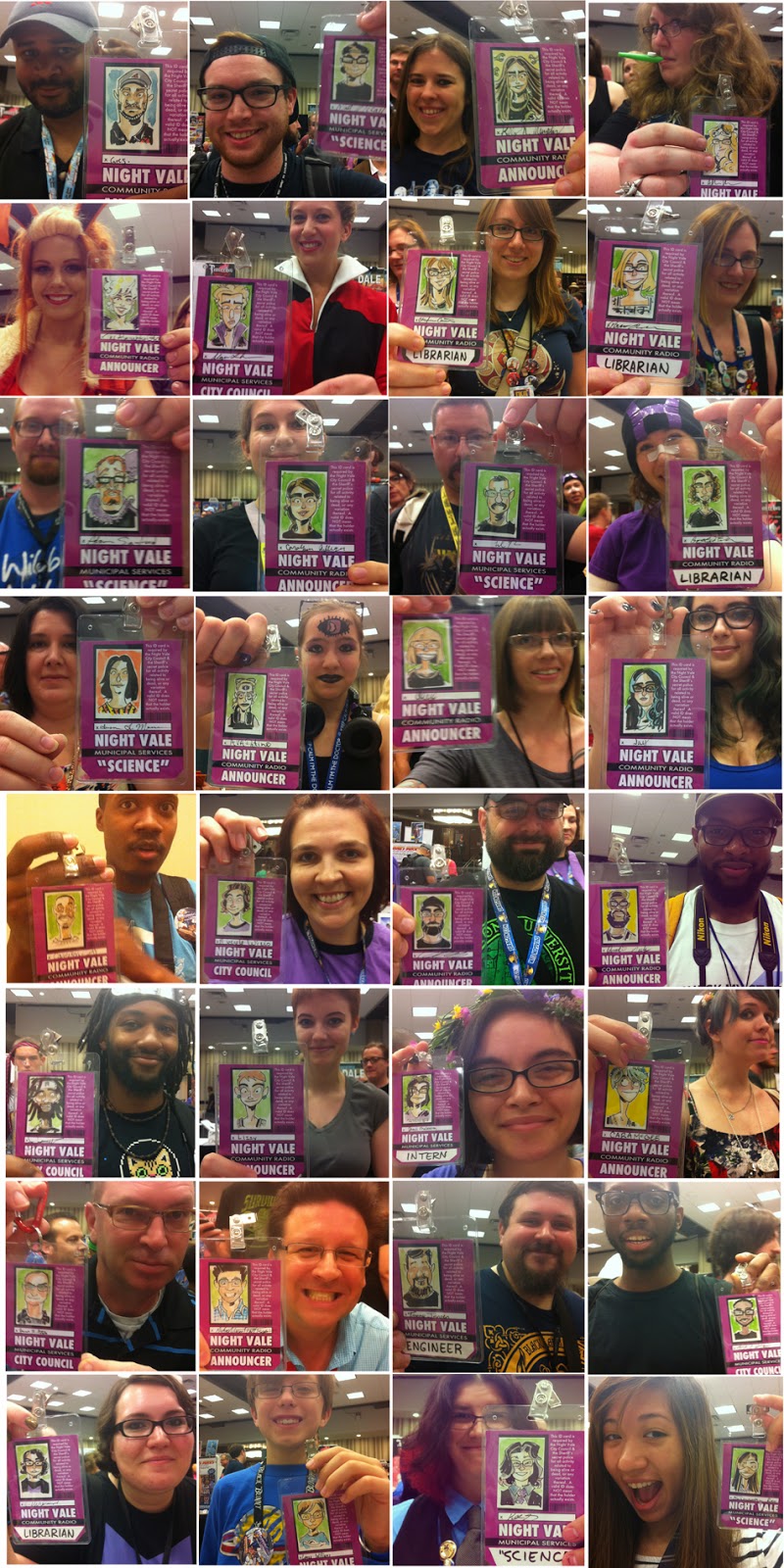 A few people asked me what prompted the badges, and it's because I made one for "Welcome to Night Vale" Carlos costume last year. I showed it to some of my friends and they wanted me to make badges for them for the Night Vale meetup, too. And then they showed their friends and so on and so on. I'd been doing little watercolor portraits and I figured I could just give people a badge with 'em. I only printed up so many of the night vale templates so when I started running low I also started doing from-scratch badges where I drew everything.
Anyway, it was a really fun way to have a little more time with the folks who picked stuff up at my table, and I had a fantastic DragonCon all around. Thanks to everyone who had so much patience waiting in line and for being such a fun and enthusiastic group.

Posted by Chris Schweizer at 10:50 AM No comments: