I'm intending to post one character drawing per day, until I forget to.  Hopefully I won't.  I have plans like this pretty often, but generally speaking am terrible about implementing them.  Anyway, I'm gonna do my best.

First up, Batman as he looked in the late 1930s.  He was a lot pulpier, and not the most pleasant of folks (it took his shooting a number of developmentally challenged wards of the state that had been giantized by a mad scientist from his autogyro to prompt editor Whitney Ellsworth to insist on Batman no longer using guns or killing people in general).  I think there's something charming about the more-literal "bat ears" of the costume, and the purple gloves, and the cape's winglike qualities.  I tried to make the utility belt look, well, utilizable. 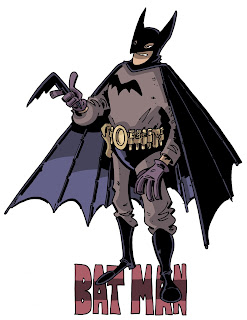 I'm going to start making the black-and-white original art for these drawings available, too.  They're mostly done on 8.5x11" heavy stock paper (80#), though some (like Batman) are a few inches larger. If you want one, you can pay via the paypal link.  If more than one person pays,  the first one to have done so gets it and anyone else will get a refund.My new plan is to do the post office every Tuesday (since they're sometimes closed on Mondays for holidays).  So it'll go out the Tuesday after you buy it.

Posted by Chris Schweizer at 1:08 PM