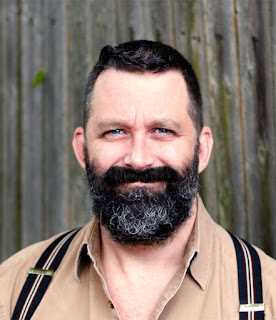 Chris Schweizer is a three-time Eisner Award-nominated cartoonist, author, and illustrator. He is the writer and artist of THE CREEPS graphic novel series, THE CROGAN ADVENTURES graphic novel series, MAKER COMICS: FIX A CAR, and THE ROANOKE COLONY: AMERICA'S FIRST MYSTERY. He is also the writer of the DISNEY'S PIRATES OF THE CARIBBEAN comic series (working with artist Joe Flood) and the artist of the MARS ATTACKS comic (2018, with writer Kyle Starks).
He has done art for a number of board games, including TROGDOR: BURNINATE THE COUNTRYSIDE and MONTY PYTHON AND THE HOLY GRAIL.
He is also the artist behind the SCHWEIZERCRAFT line of wooden figures, toys, and decor.
He was a college professor for five years at the Savannah College of Art and Design-Atlanta (2008-2013), where he taught narrative theory, writing, comic theory, and character and environmental design courses. He has been a visiting instructor at Denmark's Drawing Academy and at the Animation Workshop in Viborg.
He lives with his wife and daughter in rural Kentucky. Before becoming a cartoonist Chris was, at various times, a hotel manager, a movie theater projectionist, a guard at a mental hospital, a martial arts instructor, a set builder, a church music leader, a process server, a life-drawing model, a bartender, a car wash attendant, a bagboy, a delivery boy, a choirboy, a lawn boy, a sixth-grade social studies teacher, a janitor, a speakeasy proprietor, a video store clerk, a field hand, a puppeteer for a children's television show, a muralist, a kickboxer, and a line worker at a pancake mix factory. He has an MFA, a Black Belt, and holds a colonel commission from the Commonwealth of Kentucky.