Hey, Age of Ultron is coming out this week, so I thought I ought to add a few more folks to the Marvel Pulp series.  Some of these I did some time back, but I added a few because hey, why not?  Also, I recolored Vision to match the movie version because I like that color scheme better, it contrasts more effectively with the rest of his teammates. 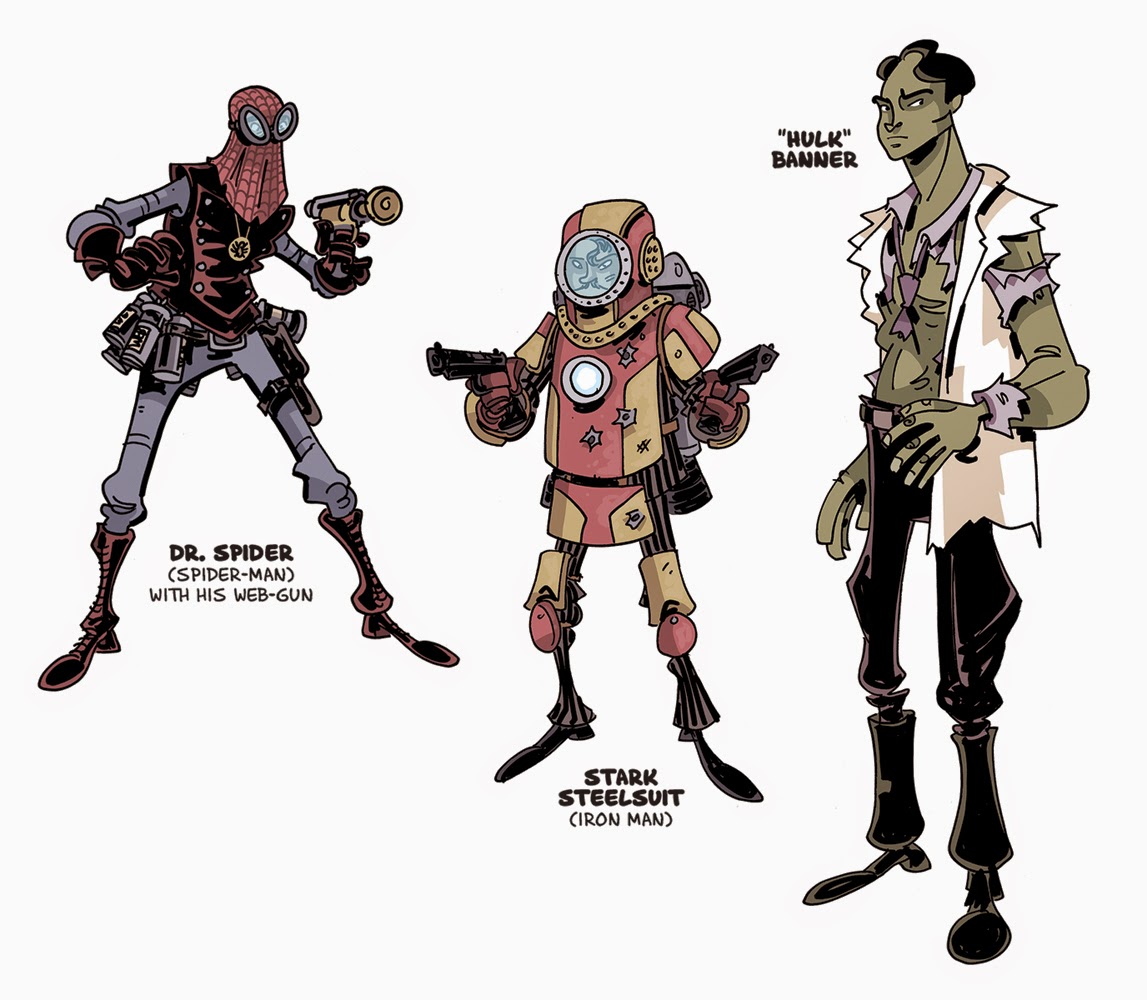 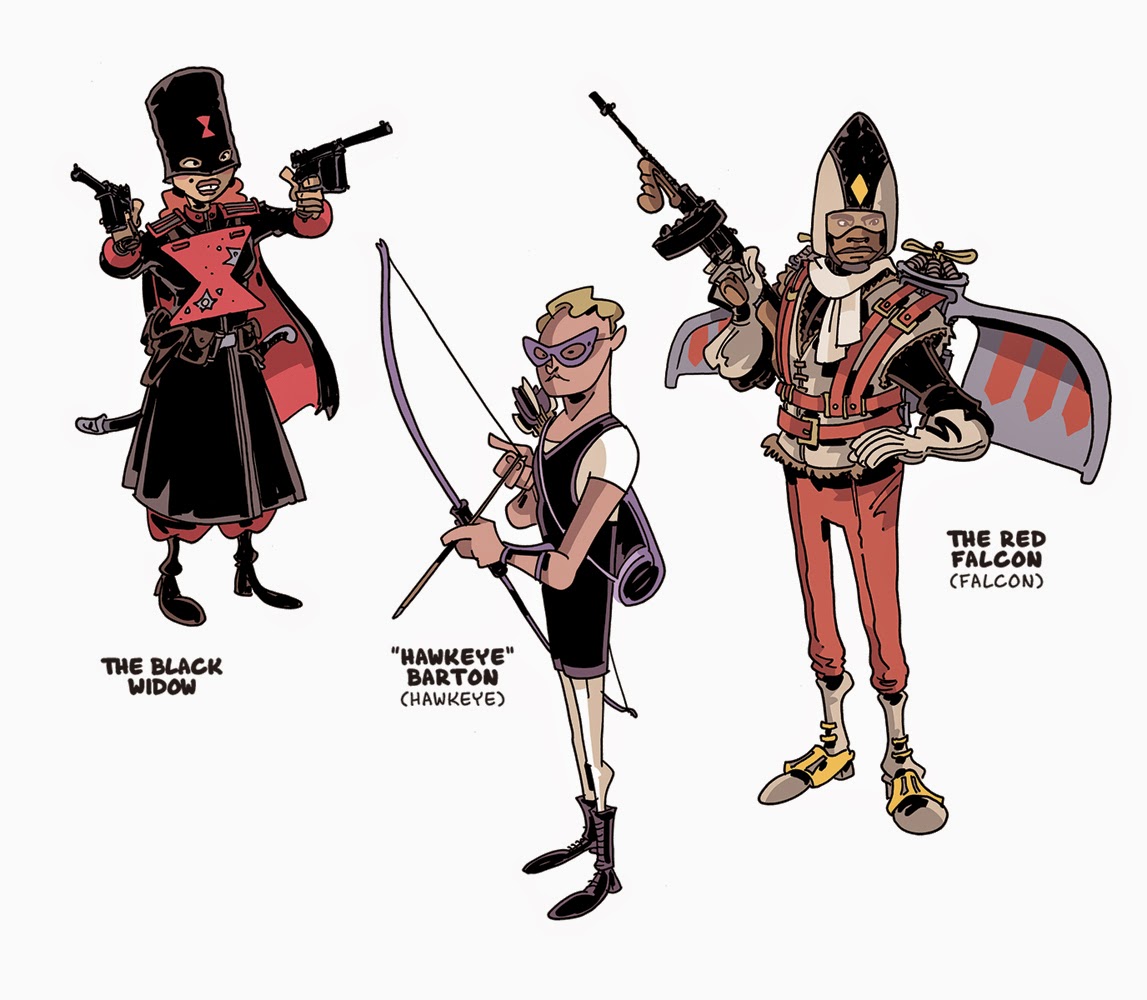 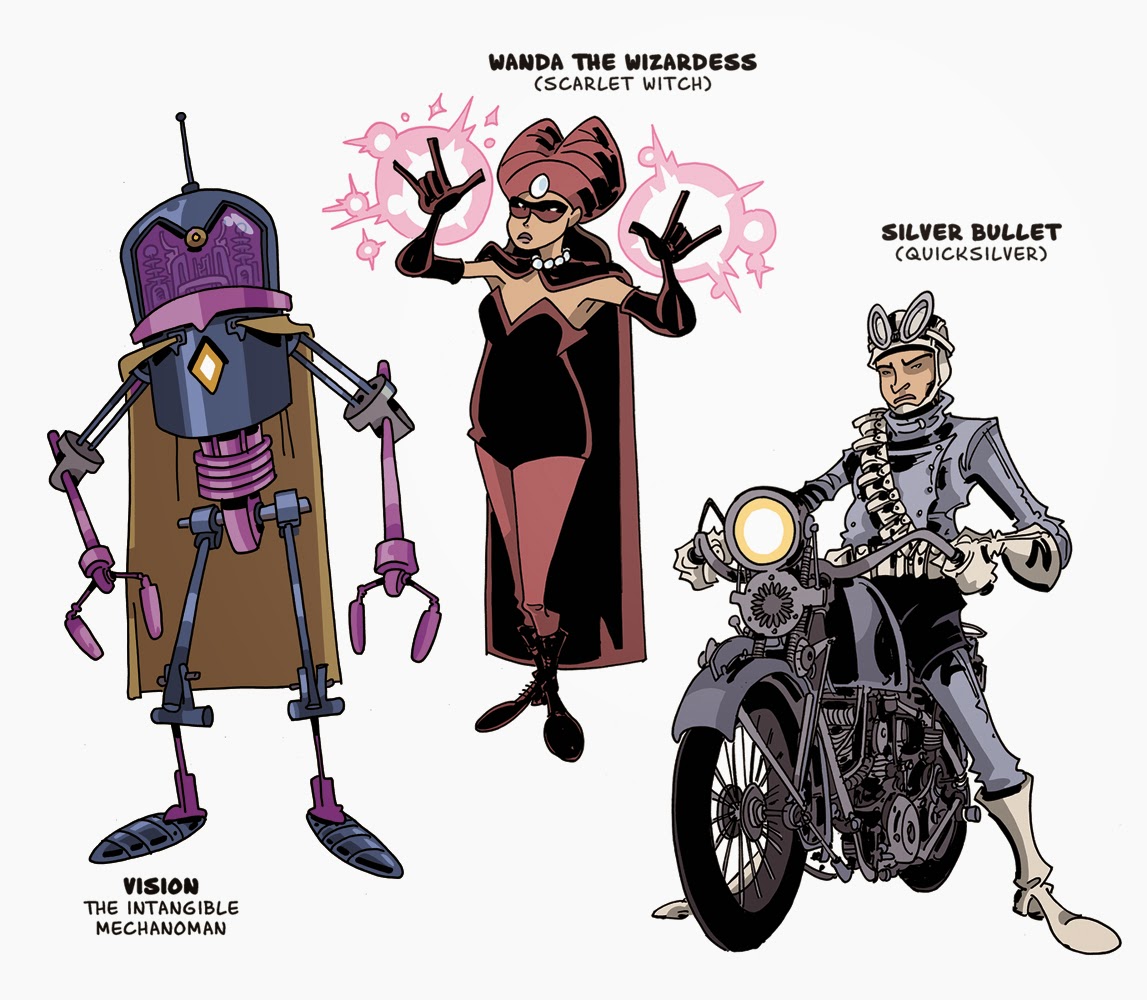 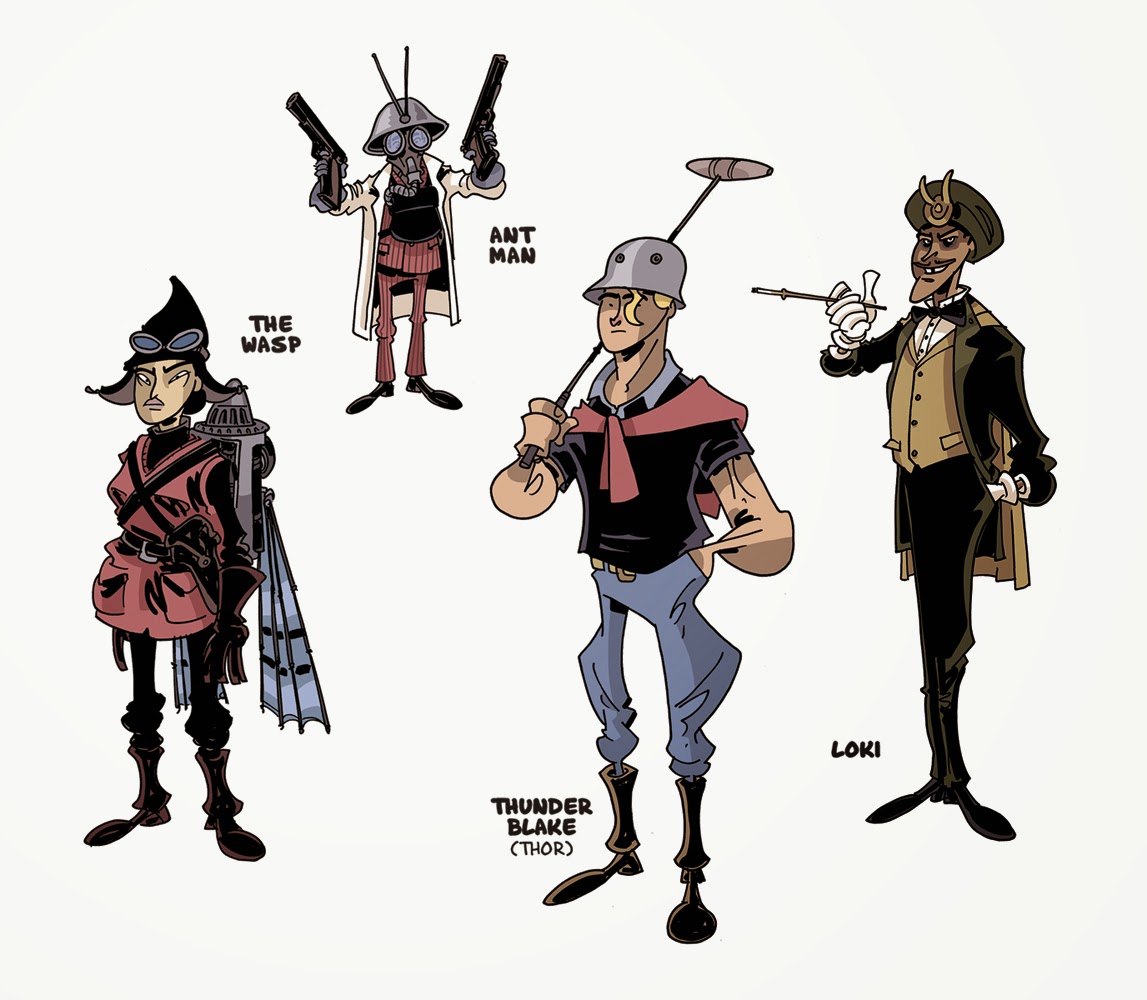 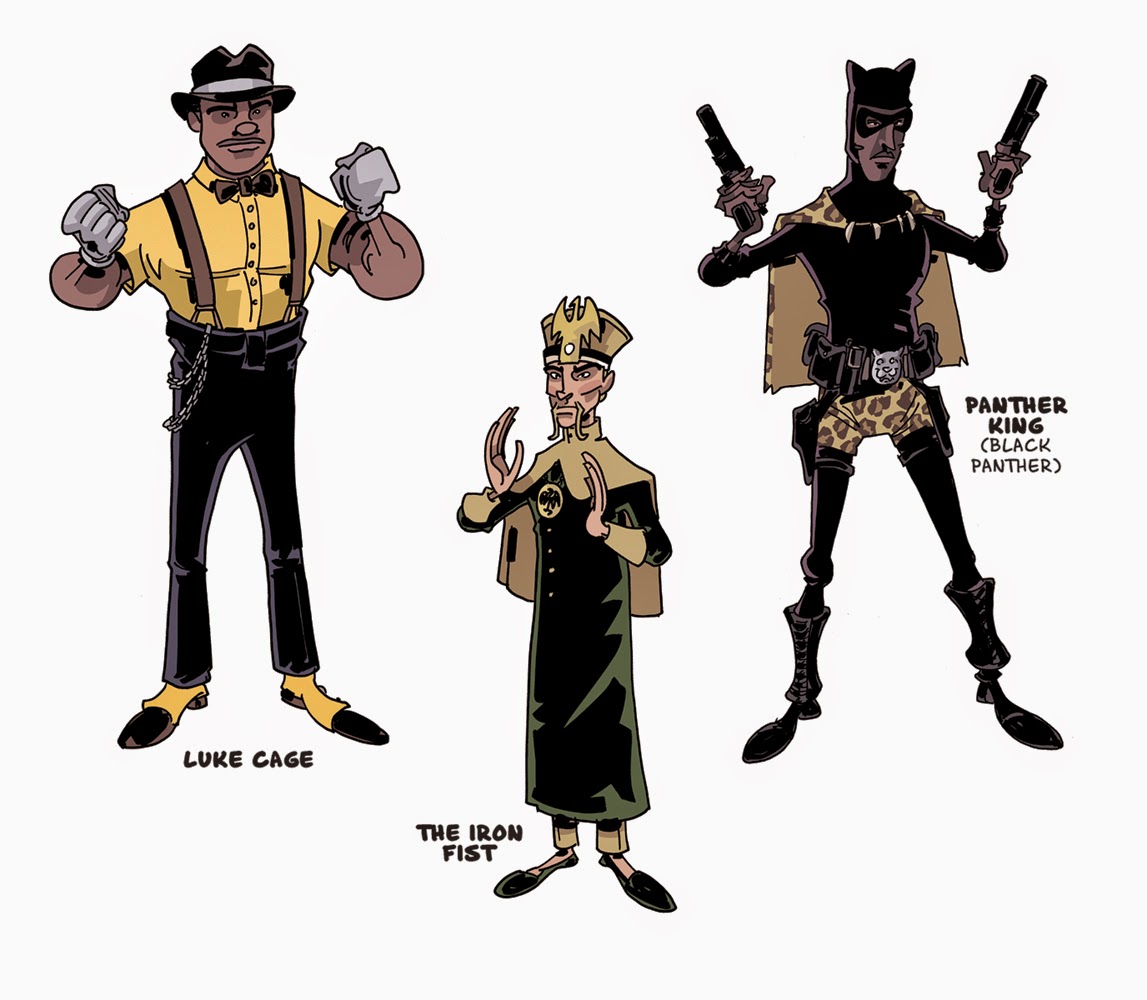 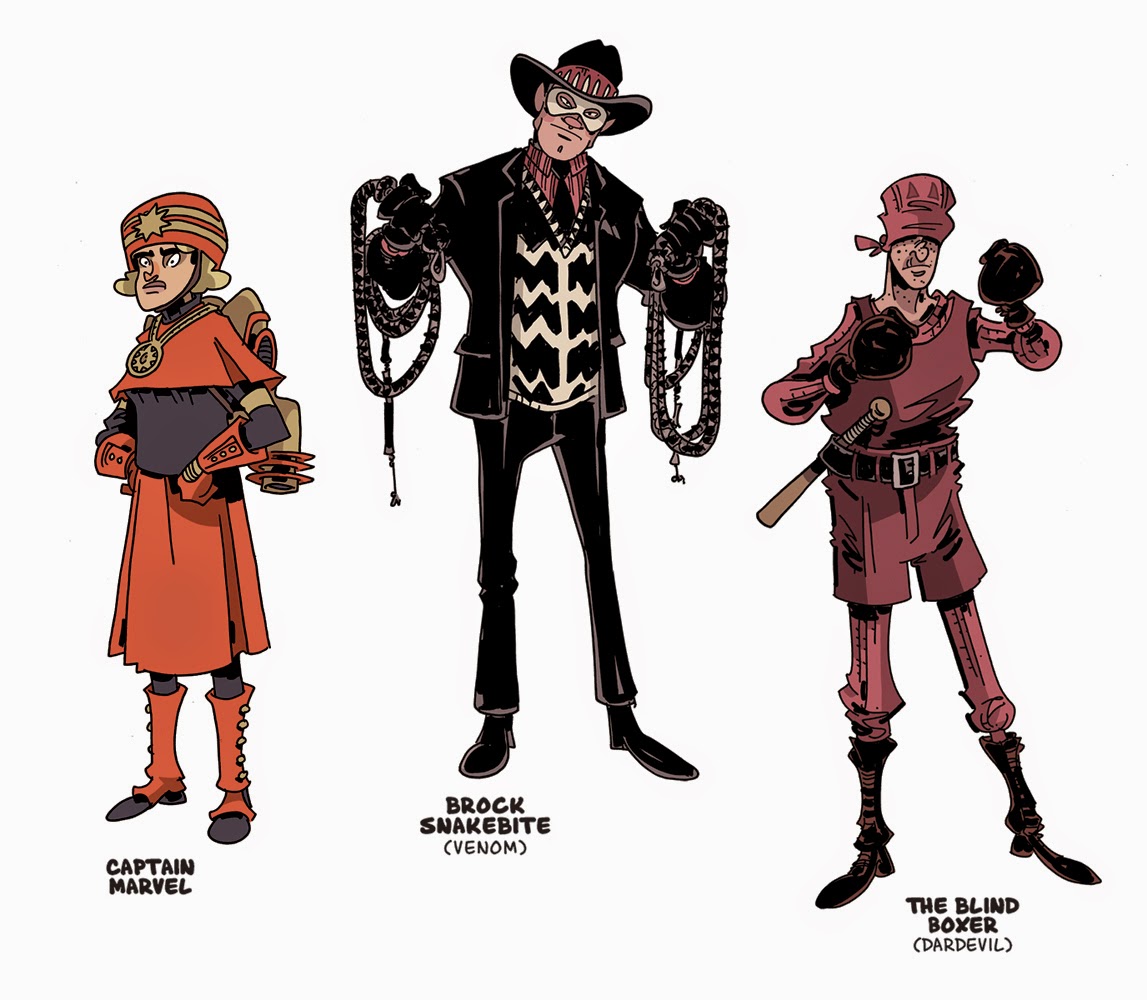 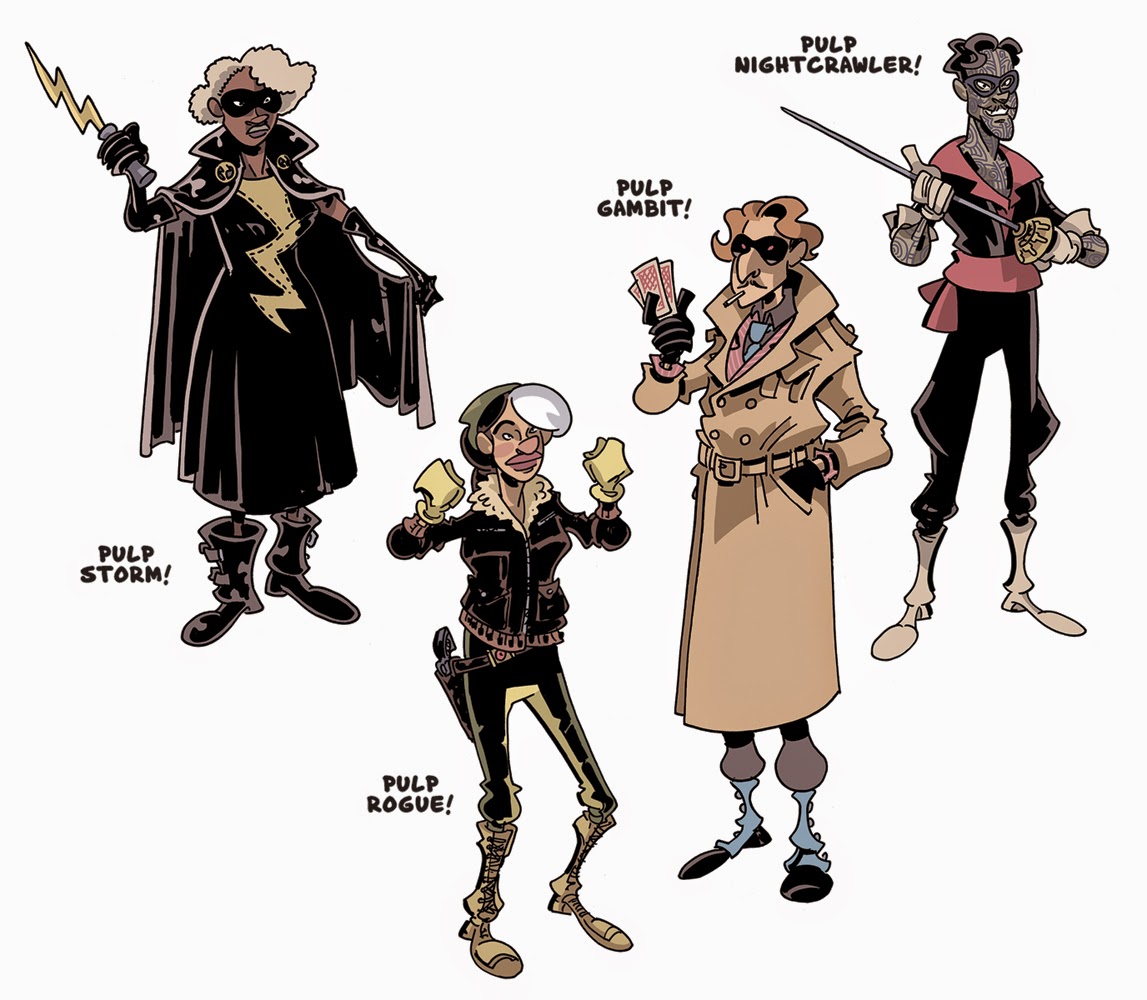 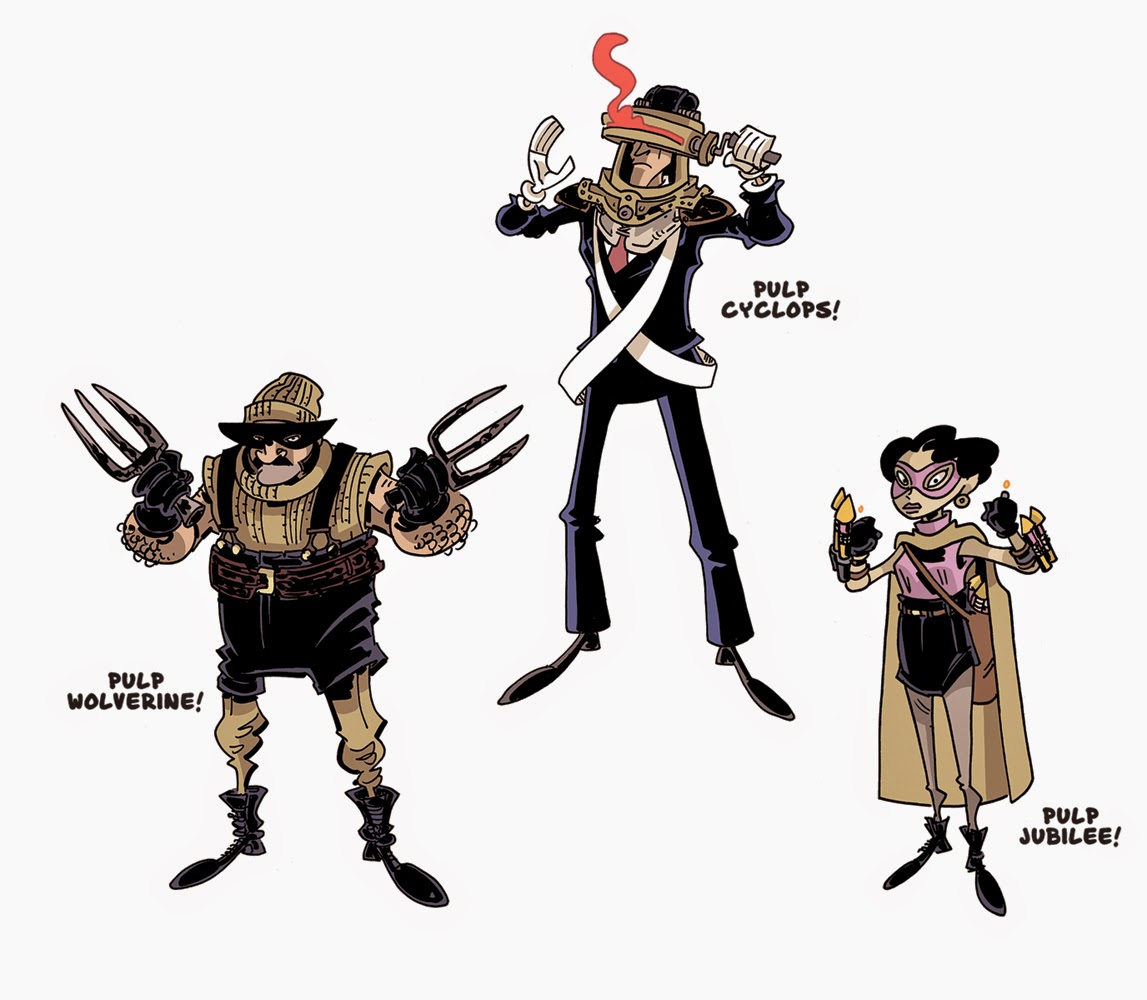 Posted by Chris Schweizer at 7:42 AM 7 comments: 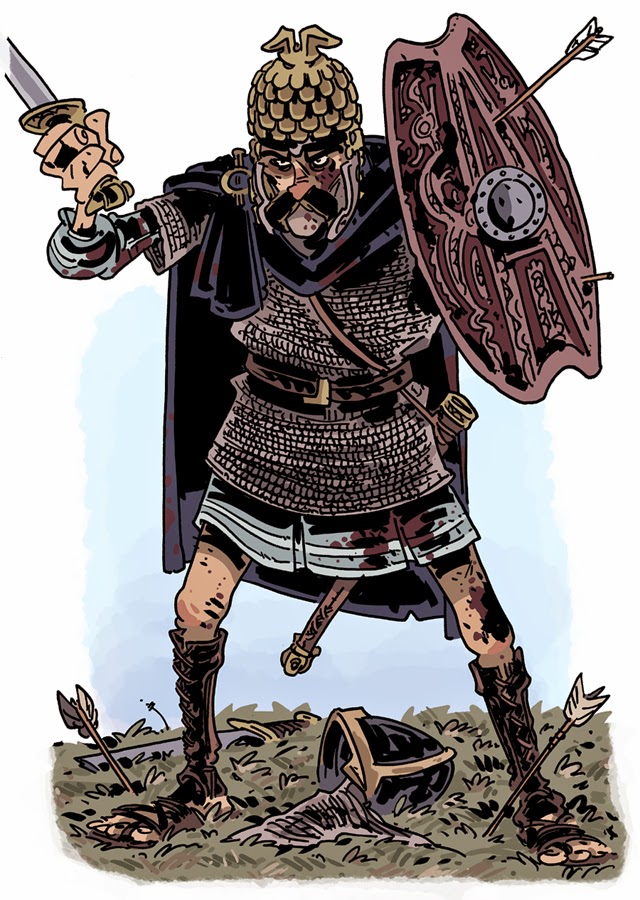 Posted by Chris Schweizer at 2:38 AM No comments:

The Crogan Adventures: Catfoot's Vengeance (the color edition of what was originally published in black and white as Crogan's Vengeance) comes out this week, and I thought I'd celebrate by discussing some piratey stuff. 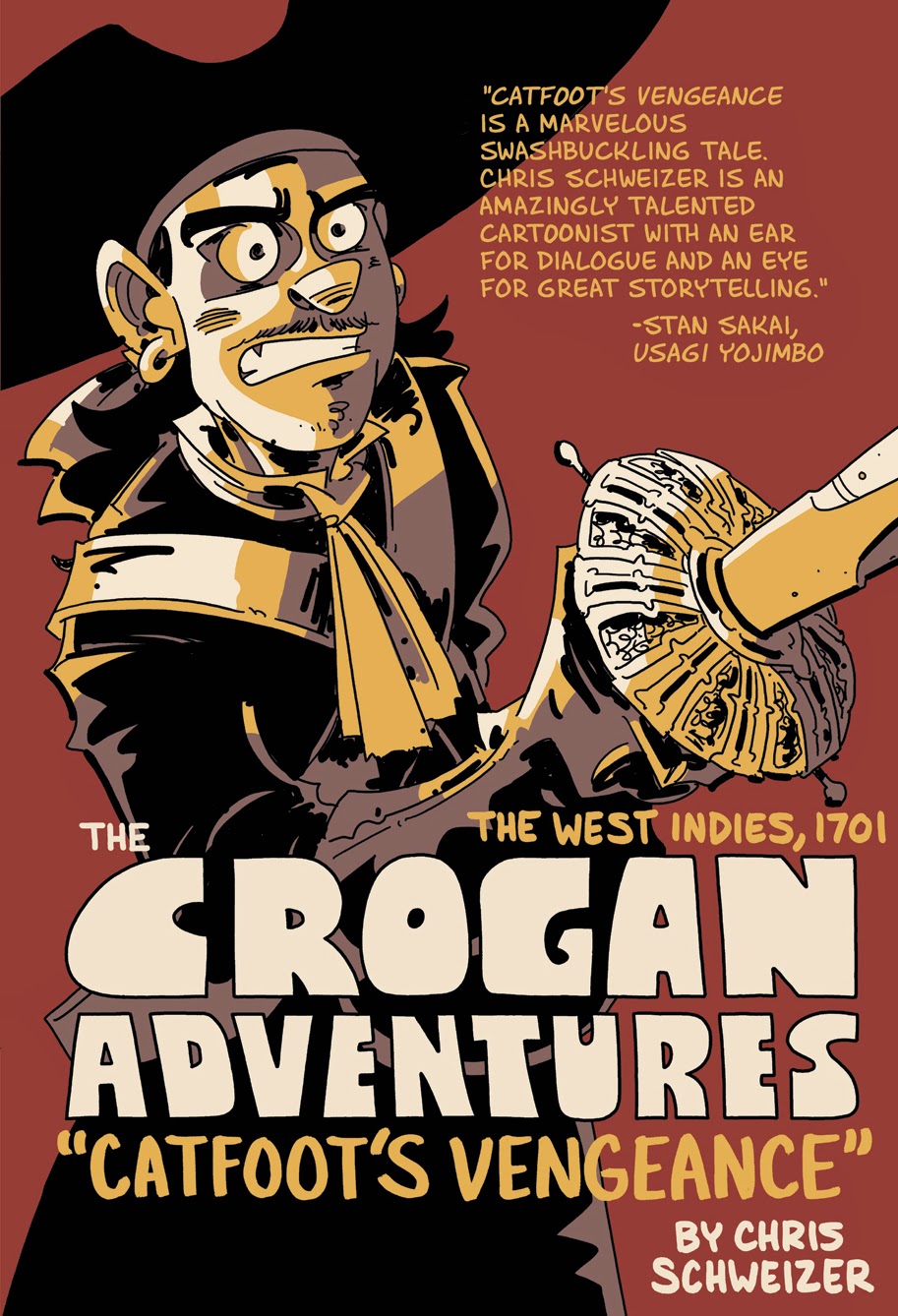 When I’m working on a book, I try to immerse myself in its genre as completely as possible, and that includes the music to which I listen.  For Catfoot’s Vengeance, I was listening to a lot of things.  Old shanties and nautical songs (Canadian balladeer Stan Rogers was on ready rotation) were a mainstay, but nothing helped like good ol’ movie scores.  Here are my top pirate movie scores.

9. Roman Polanski’s Pirates by Philippe Sarde
Probably closer in spirit to the Pirates of the Caribbean ride that the movie sharing its name, Polanski’s picaresque hits most every major buccaneer trope and features Walter Mattheau in my very favorite of his roles, a heavily-accented one-legged pirate captain of limited intelligence.  Sarde’s score is pretty much straight Korngold with more playful piccolo, and the movie, though containing no real plot of which to speak, is a treasure trove of period detail, and there has never been a movie better suited to fiddling with your viewing controls.  Can you take your saturation down to zero on your computer or TV?  If so, do it; this thing is best in black and white.

8. Treasured Island by Nicholas Dodd
Very rooted in 6/8, this one feels quite a bit like Trevor Jones’s League of Extraordinary Gentlemen score without feeling like it rips it off (I excluded Jones's Nate and Hayes score because, though the theme song is very punchy, the rest of the album just doesn't feel genre-specific).  I never saw Treasured Island, which features Bob Hoskins as Silver, but I found the CD at McKay’s and it was well worth the asking price.  Action movie percussive in a not-obnoxious way.

7. Black Sails by Bear McCreary
Though this one obviously did not come out until long after Catfoot’s Vengeance was completed, McCreary’s hurdy-gurdy-heavy mood setter is really top-notch.  No real sense of action or adventure, so it isn’t really a swashbuckler, but it’s fine pirate music, and tying the shanty “The Ballad of Captain Kidd” to the structurally identical hymn “What Wondrous Love is This” is a stroke of genius that marries the subject matter of the former with the cultural significance of the latter, drawing narrative parallels between the relationship on screen and the idea of unconditionality.

6. Treasure Island by the Chieftains
Though not released as an official score, selections from the celtic instrumental band the Chieftains served as the musical backbone of the Charlton Heston/Christian Bale TNT Adaptation, which is without doubt the best straight adaptation of the Stevenson novel (though I did very much enjoy the fresh, salty, deconstructionist  Eddie Izard version that came out a few years ago).  As with most pirate scores, this one presents an attempt to capture the period feel by use of period instruments, and it succeeds wonderfully.

5. Pirates of the Caribbean: At World’s End by Hans Zimmer
The third POTC film, scored entirely by Hans Zimmer (the preceding scores were the works of Klaus Badelt with Zimmer’s assistance), took the earlier material and really made it sing in a way that it hadn't before.  The jaunty “Up is Down” was my marching-to-school song, and the subliminally over-the-top “I Don’t Think Now’s the Best Time” (especially its second half) and “One Day” unify the myriad themes into an exciting, uplifting, transcendent pirate musical experience.  Like a lot of Zimmer scores, there's enough ambient mood-setting to knock the overall album down a few pegs (fine for the film, but tougher on standalone listens), but these bits are good enough to keep it in the top 5.

4. Shipwrecked by Patrick Doyle
My dad and his best friend checked me out of school (fifth grade) to see this Disney adventure live-action film, an adaptation of a popular Norweigian kids’ adventure novel.  We smuggled in three giant bags of candy (Reese’s Pieces, Skittles, and M&M’s) and the combination of illicit sweets and a hooky-timed film made this one of the most exciting events of my young life.
Patrick Doyle, in his second film score, delivers a complex and exciting score here, not the usual bombastic buccaneer fanfare but an inquisitive and playful symphony that is as light and reserved as the film is with its small cast.


3. Willow by James Horner
James Horner’s swashbuckler is for a fantasy world, but the rapid-fire horn section of “Willow’s Theme” (repeated throughout the film in various versions) is an easy analog for pirate music, just made for swordfighting and jumping off of things. I hummed it to myself while running along the roof and repeatedly jumping onto the ladder neighbor’s RV at age seven, fencing foil in hand.  Horner's Mask of Zorro soundtrack is also worth a mention; heavy with Spanish influence, it would fit well with the earlier buccaneer vs spaniard stories.

2. Hook by John Williams
Steven Spielberg’s sequel to Peter Pan came out at the perfect time in my life.  I was eleven years old, and just a month before its release I’d finished a run as John Darling in a spectacular production of the musical version of Peter Pan (which is, to be fair, a truly awful musical, though an excellent play).  In addition to the thrill of being regularly hoisted some forty feet off the ground for the flying sequences, I had a chance to memorize the entirety of the dialogue, something I did with most every play with which I (or my dad, a regular actor or director) was involved.  Spielberg’s film made enough ready reference to the original that I felt an immediate kinship to it, and, as a kids’ movie, it had most everything I could have wanted.  I’ve found that there’s a discernable gap of appreciation when it comes to Hook, mostly generational; if one was a kid at its release, it was great; if an adult, it was drivel.
One thing that IS incontestable is that the nautical elements of the soundtrack, the Captain Hook-centric themes (The Nursery, the Dog Barks Hook, Presenting the Hook, Hook-napped, Pirates) are some of the finest pirate bits ever written, playing up the latent menace of piracy.  Too often we forget that pirates sometimes work best as bad guys, and that sense is really captured here.
I had the soundtrack in fifth grade, and I noticed that there was a distinctly nautical flair to these pieces.  I played a few for my dad, and asked him why they so clearly evoked a sense of being on a ship’s deck.
He told me that they were written in 6/8 time, which gives a very rolling feel.  In fact, lots of great pirate movie scores are written in 6/8 time, which harkens back to the shanties and double jogs that constitute many nautical diddies.  I wrote a theme for Catfoot’s Vengeance in this signature back when I was first working on it, but as I can’t play any instruments worth a darn it’ll likely always stay in my head.
If you like Hook, you can pick up Williams's Harry Potter work, too.  It's an extension of this earlier work, and "Hedwig's Theme" is perfect for a moonlit deck on a foggy night watch.

1. Cutthroat Island by John Debney
Cutthroat Island is distinct for two superlatives: it's the worst (real) pirate movie of all time, and it has the best pirate movie soundtrack of all time.  It's as big as bombastic and piratey as you can imagine, but it feels period-and-genre-appropriate in a way that Zimmer's similarly gustoic score doesn't.  Debney seems at his best when aping genre conventions and unironically bringing them to the forefront (Lair, Zathura, etc), and nowhere does he do that better than Cutthroat Island.
With every book, I have one go-to score that I listen to for the overwhelming majority of its execution.  For Catfoot's Vengeance, that score was undoubtedly Cutthroat Island.

All of these films were released within my lifetime, which probably demonstrates a taste-of-my-time bias on my part.  Mid-era pirate films like Swashbuckler or The Crimson Pirate have no menace to them whatsoever, feeling better suited to rococo riding parties than swordfights, and the Korngold stuff of the earlier age, while setting the standard for the genre, never resonated with me at a gut level.   The Buccaneer by Elmer Bernstein probably comes the closest, but it’s a little generic, genre-wise.  Weaving Korngold and Copeland, Bernstein delivers a great score here with good themes, but the closest he gets to pirate specificity is in a market scene that mixes battle rattle and the Spanish colonialism that colors the culture of Caribbean port cities (this one's New Orleans, but hey).  Bernstein rarely fails to deliver a rousing musical accompaniment, and this one's no exception, but this could just as easily be the score of a bible epic or western.

There are also plenty of swashbuckling sounds in superhero movies that make good stand-ins for pirate music.  Elfman's "Batman Reprise" probably takes the cake on that one (evidenced by how how it was blatantly ripped off for the following year's Cyrano De Bergerac's "La Porte De Nesle"), but a lot of other pulpy theme song stuff carries much the same vibe.

Anyway, by no means the definitive word, just my take on the genre. 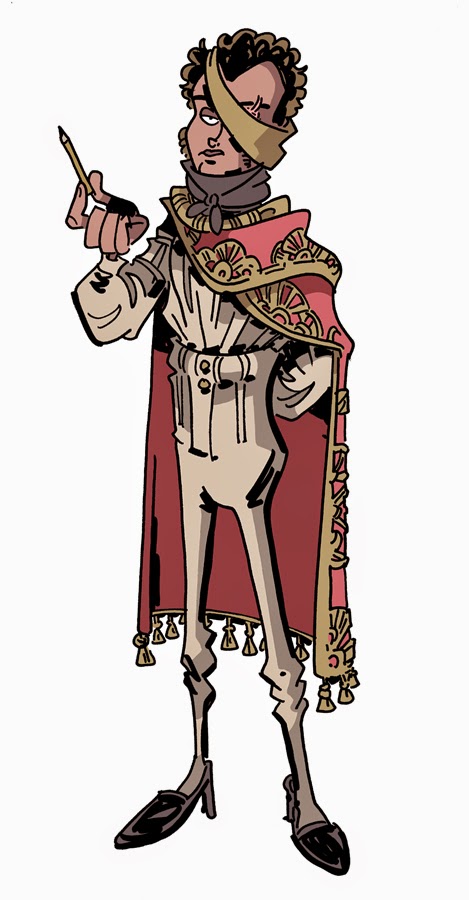 Nicolas-Jacques Conté, inventor of both air warfare and the pencil.  Also the conte crayon, all you artsy folk.
Posted by Chris Schweizer at 11:15 AM No comments:

Email ThisBlogThis!Share to TwitterShare to FacebookShare to Pinterest
Labels: history, portraits, This Day in History 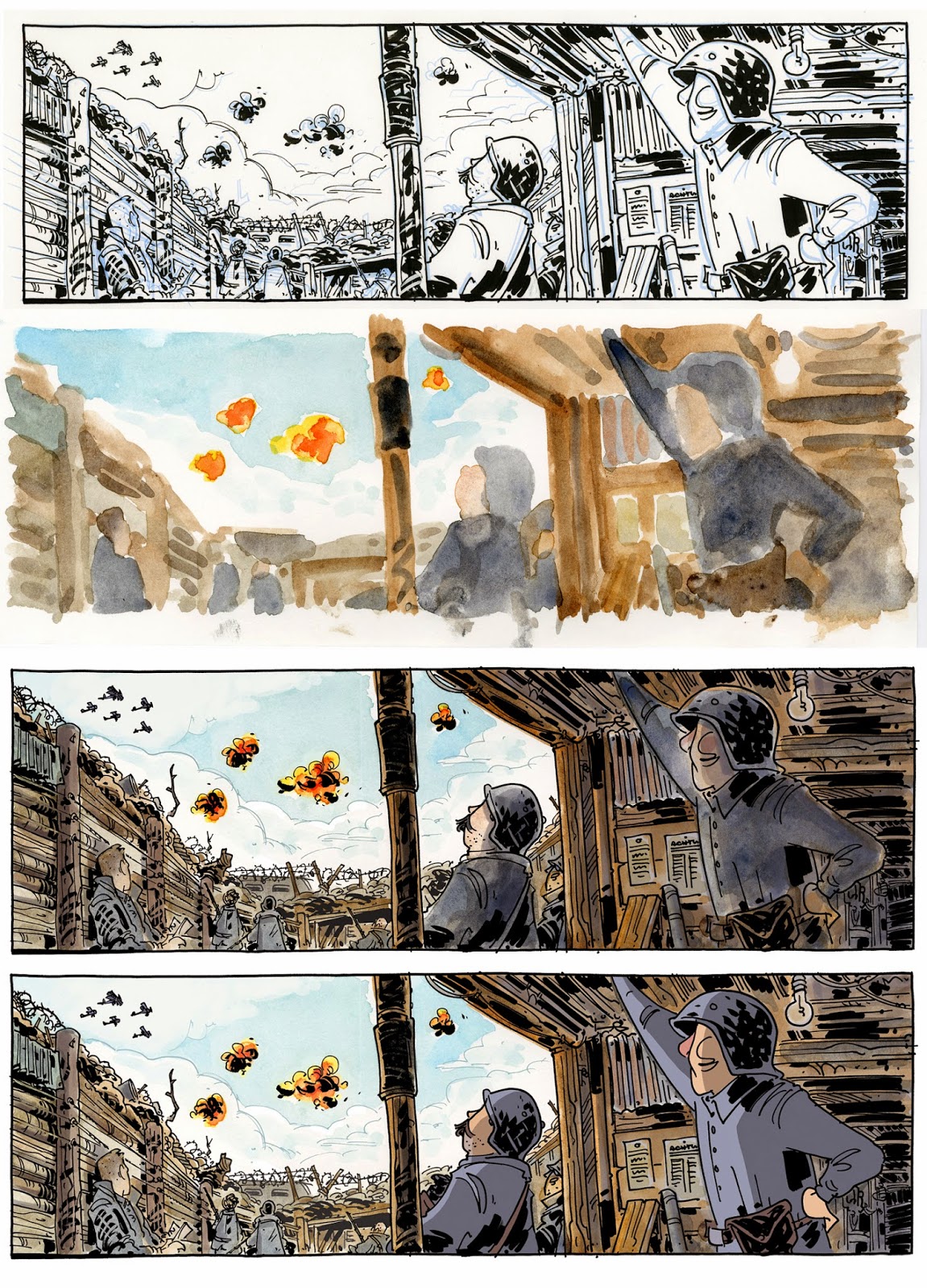 New process method!  Thought I’d share.1: Inks, the regular old way.2. I lightbox the inks and do a basic watercolor job on a blank sheet of paper3. I lay the line art over the watercolors digitally, then go in with a digital watercolor brush (the Kyle Webster “wamazing” brush) and touch up details.  I also darkened the value inside the bunker.4. That would have been it, but the other focal points in the comic - planes - were colored flat digitally, and those two guys stood out like sore thumbs, so I colored them flat digitally to match the other panels.  The final panel is how my future historical stuff is likely to look; digital focal characters, watercolor background (and background characters).It’s a little cumbersome, scanning twice, but I think that it’s faster than digitally coloring all of the elements of an environment, and it kind of has an old-school 2D animation look to it, which I like.  Speed is super important.  I want to make as many comics as possible but I don’t want to sacrifice quality, so any method that potentially yields quicker results is a big win.

Posted by Chris Schweizer at 11:08 AM No comments: