Advent Calendar Day 9: The Retinue of the Magi

Advent Calendar Day 9: The Retinue of the Magi 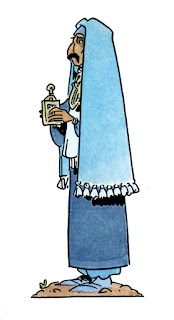 We Three Kings, right?  The Gospel of Matthew neither gives them number or royal status.  This is one of the most widespread examples of cultural tradition taking hard root in the religious consciousness.  Most folks who have studied the Bible know this, but still have no problem with the kings being a standard part of the Christmas narrative.  Which (if you haven’t caught on to my leanings over the past few days) is a great thing, in my book.  It’s important, I think, that religious folk recognize that much of the narrative we associate with the Bible stems from a long tradition of interpretation and addition (not even a post-Biblical thing; folks in the Bible itself do this throughout when addressing earlier scripture) rather than cold reading.  The acceptance of the three kings shows that even those who subscribe to strict literalism (itself, despite protestations, built on codified interpretation) are willing to concede to scriptural divergence when properly acclimated (I’ve never known a literalist who protested the inclusion of three kings in a Nativity scene unless he or she was a hardnosed iconoclast across the board, objecting to crèches in their entirety).

So why three?  Well, three gifts (gold, frankincense, and myrrh) are mentioned by name, so associating each with a specific giver is as good as theory as any other, and the only one whose genesis is scripture-specific, leading to widespread acceptance in Christian circles.  But there are plenty of traditions dating back to the early days of the Church that give different numbers, the most popular being twelve, accompanied by a small army of attendants, students, and guards, their movement being notable enough to require royal permission to travel through Judea, hence the court with its king, Herod the Great.

Had I not been lazy, AND unwilling to outnumber the lowly with the high-born out of concerns mentioned in the shepherds write-up, I’d have opted to make nine additional magi to accompany the kings; as it is now, I offer four, totaling the number of Magi at seven, an unpopular but existing grouping probably rooted in a misreading by 12th century college professor/theologian Peter Comestor of the histories of Josephus in which seven nobles are said to rule in a sort of loose parliamentary system in conjunction with Darius of Persia, interpreted by Comestor as wise advisors, ostensibly setting precedent for a standing council of seven magi.  Since the general consensus of early theologians was that the magi were Persian, this is better reasoning than some theories, and it lets me get away with drawing five fewer magi.

Over the centuries, the assumed regional origin of the magi has slowly spread from Persia to Yemen and Babylon to ever-reaching expanses southward and eastward, encompassing Arabia, Central Africa, India, and, most recently, the Far East.  Depictions of Caspar as a Southeast Asian have skyrocketed over the last decade or two, part of a longstanding tradition of using the magi to insert more ethnic diversity into the Christ narrative.  Those who think that shoehorned diversity in existing narrative franchises is a recent movement are clearly ill-informed, as nativity art has been doing it for centuries upon centuries as the “world” has expanded outward.

The four here are from India, Ethiopia, China, and Persia, attempts on my part to round out the more specific regional origins sometimes assigned the magi but less in keeping with traditional representation of the three popular named kings of western tradition. 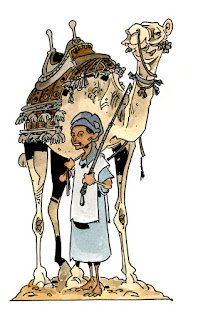 Also a gifts-and-studies-laden camel, and a camel driver with a mount.
Posted by Chris Schweizer at 11:08 PM