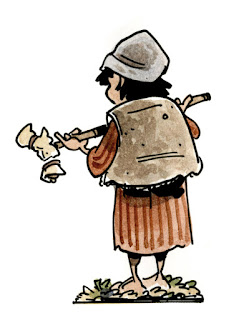 When I was a kid, my dad ran an opera company, and every Christmas (at least most of the ones that I remember) he put on a one-act Christmas opera by Gian Carlo Menotti: Amahl and the Night Visitors.
I know this opera backwards and forwards, having watched it who knows how many times, sat in on many of the rehearsals leading to those performances, and even being in it, one season as Amahl (I think it was only once, but it may have been twice) and another, later, as a camel driver.
Amahl is the story of a crippled boy whose livelihood (goats and shepherding) has been slowly whittled away by economic hardship until his only avenue is begging, which he intends to undertake the next day (though he is an unrepentant liar, so he’s probably just going to lounge on a rock or something).
The Three Kings stop at his house on their way to Bethlehem and seek lodgings.  The impudent Amahl pesters them with a series of comic interactions, and the poor mother, with no other means by which to support her sickly child, makes to steal a little of the treasure being taken to some baby who won’t even appreciate it.  She’s caught, and the kings forgive her in Christ’s name.  Amahl, moved by this show of mercy, decides to give Jesus a present, too: the only thing he has: his crutch.  When he reaches out to pass it to the kings, he stumbles, and catches himself on his previously lame leg.  Miraculously healed, he dances around and leaves with the kings for Bethlehem.
Oh!  And there’s one of those villager parades mentioned in the last essay.


The opera was the first ever commissioned for television, and, airing on Christmas Eve in 1951, had the largest audience ever for a televised opera.  It was a yearly tradition on NBC until 1966, when disagreements between the network and composer led him to take the broadcast rights away.
Posted by Chris Schweizer at 10:38 PM