The Ox and the Ass are staples of art and song, but if we stick to the Biblical birth stories, we find them noticeably absent.

We could argue the chicken/egg thing with a lot of the Nativity characters so far as whether their narrative presence was interpreted symbolically, or if they were a part of the narrative BECAUSE they served a symbolic purpose, but with these two barnstormers it’s clear: their presence is entirely symbolic.

The ox and the ass (I know the cutout says “donkey”; that’s a concession for any beleaguered Sunday School teachers who would otherwise have to contend with the continual readings of rapscallious eight year-olds eager for a language loophole) represent Jews and Gentiles, respectively.  The Ox, a cloven-hoofed creature that chews cud, is clean by the legal standards, a Jewish animal, good for eatin’ and sacrificin’.  The ass, with its equid hoof, is not, and thus represents the Gentiles. 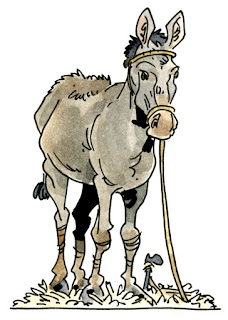 The push on the part of early Christians Peter and Paul to unexpectedly promulgate Christianity outside the confines of Judaism was a HUGE deal for the religion and for history (by permitting cultures to maintain their existing cultural practices, the belief system became hyperdisseminatable).  So backdating that move symbolically to the time of Christ’s birth allows for a later staple of the Christ narrative to find presence at its beginning (there will be a couple of other examples of that exact same thing with other characters)*.

In any case, this symbolic representation of these two groups, worshipping baby Jesus in miniature, also gives us a very creative interpretation of Isaiah 1:3.  The Book of Isaiah (part of the Old Testament/Tanakh) is viewed through a Christian lens primarily as it relates to Messianic Christ via prophecy, but 1:3 (“The ox knows his owner, and the donkey his master's crib, but Israel doesn't know me; my people don't comprehend") isn’t prophetic in the least, it’s just a flowery gripe, UNLESS you assign prophecy to it after the fact once the symbols (probably purloined from the verse in the first place for art dating back as far as the 300s) are part of the story.  There’s a long tradition of people of faith reinterpreting existing scripture to meet the spiritual needs of their time and the changes that their world has necessitated, and the ox and ass serve as a reminder not only of the embrace of cultural pluralism by the early church but of how sacred texts are ever-evolving things, not in their content but in how that content is perceived.

*In that tying-later-stuff-to-the-beginning vein, I’m actually really bugged that there’s not a non-canonical infant gospel in which baby Jesus spits a seed from whence grows the tree that will be used to make the cross.  Come on, Gnostics, you really dropped the ball with that one.  Or maybe they didn’t.  Does that one exist?  I hope so.

Posted by Chris Schweizer at 3:40 PM