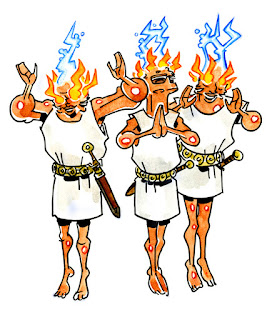 I wrote up my reasoning behind the design of the archangels back on day 4, but I ought to elaborate on why I picked four (three of whom are shown together here):

I’ve heard the four-archangel number thrown around since I first became interested in this stuff back in college.  Four is an absolutely fantastic number when it comes to an ensemble, especially if the personalities vary drastically, which I expect they would here.  Three is great if you have a protagonist and side characters, but if you want narrative equality amongst your group with the lean efficiency of a minimal group dynamic, four is the ideal; it’s why I use a gang of four in the Creeps books.

The Catholic Church only recognizes three (the ones pictured in the middle here): Michael, Gabriel, and Raphael, the only ones mentioned by name in the canonical scriptures.  But Raphael’s mention, in the Book of Tobit (recognized in orthodox Christian traditions but not officially in Judaic ones), says “I am Raphael, one of the seven angels who stand ready and enter before the glory of the Lord.”  So where does four come from?

Angel stuff is all over the place in the Bible, and extra-Biblical sources.  These four come from our earliest (and richest source) of angelography, the Book of Enoch.  Enoch wasn’t canonized as part of the old testament/Tanakh (the primary conflict in its inclusion probably the then-radical notion that angels might rebel against God), though it WAS widely read and oft-cited (it’s quoted in Jude and mentioned in the non-canonical Epistle of Barnabus), and has informed much of the theology and myth that surround angels.

So you could go with four, or seven, or ten, or one (the generally accepted possibilities), but like I said, four has the best and most convenient narrative possibility, and that’s where I like to set my tent.  Uriel, of course, isn’t on hand; he’s spiriting John away. 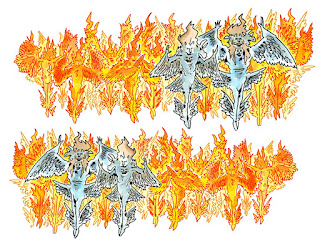 Seraphim are a class of angel mentioned in Enoch (surprise!), Isaiah, and Revelation, and their name means “burning ones,” so I drew ‘em as angels by way of the Human Torch.  They’re described as having six wings (one pair to cover their face in the presence of God, the other their feet, ‘cause feet are dirty).

Art note – I drew the angels in pen, but did color holds on the seraphim in the computer to turn the line art red for the first row and orange for those in the back.  I then watercolored the color-printed line art.  I’m happy with the results and will likely employ them in the future.

The blue cherubim (the plural form of cherub, culturally recognized as chubby nude babies with feathery wings) are described in Ezekiel.  Six-winged again, though since “feet” is sometimes a biblical euphemism for private parts I hedged my bet and threw their middle pair at crotch-level.  The four animal faces (ox, eagle, lion, and man) come from a popular assumption that the four cherubs seen by Ezekiel are the four “living creatures” described by John R in Revelations are the same quartet.

Now, these may seem like unusual angel drawings, but I’m actually playing it pretty conservatively; I’m leaving out the whole covered-in-eyes thing and I’m not making hands grow out of anyone’s armpits.  There’s only so much one can do design-wise before you completely sever the connection between subject and audience, and I feel like I pushed these as far as I could go without doing so.

Posted by Chris Schweizer at 9:02 PM