I moved to Kentucky when I was eleven, but before that I'd lived in Louisiana.  And man, were we steeped in creepy stories down there.  One of my favorite local monsters was the Grunch.  The Grunch has a lot of different names, depending on which parish you're in. Sometimes it varies from town to town.


Story goes like this: You're out driving, you see a goat, you think "hot dog, that goat would make good eating!"  You stop the car, and you're never seen again - eaten by the Grunch.

There have been a variety of narratives for the Grunch legend, and most of them revolve around a community of folks pressured to leave New Orleans because of some unusual genetic trait - dwarfism, albinism, stuff common enough to occur with some frequency but uncommon enough to cause distress to the population of superstitious pirate descendants.  These folks banded together outside New Orleans.  Now there are a few different versions of how they came to be involved with the Grunch.  One (which I don't like because of how it cartoonizes and demonizes the outcasts) is that after a few generations of inbreeding there's a terrible cannibal kid genetically adapted to living in the swamps and hungry for human blood.  The other popular take is that, consistently oppressed and occasionally attacked by New Orleans folk, the community either 1. prayed to god for OR 2. asked a vodou priestess to give them a guardian.  God or the priestess obliged, and whenever someone travels the road to the settlement intent on doing the outcasts harm, they see the goat on the roadside.

So here's my take on the Grunch: a breed of long-legged (there's fossil precedent for this), tall crested alligator that can be mistaken for a goat in poor light. 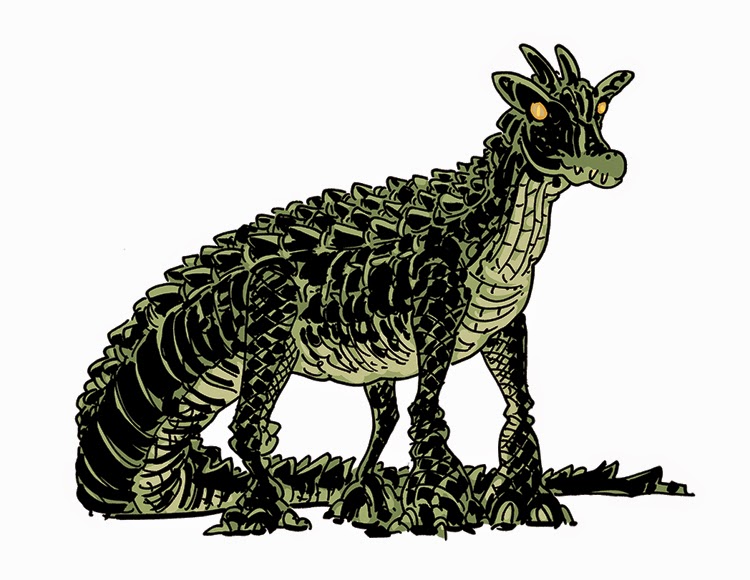 Posted by Chris Schweizer at 9:04 AM

Email ThisBlogThis!Share to TwitterShare to FacebookShare to Pinterest
Labels: Monsters