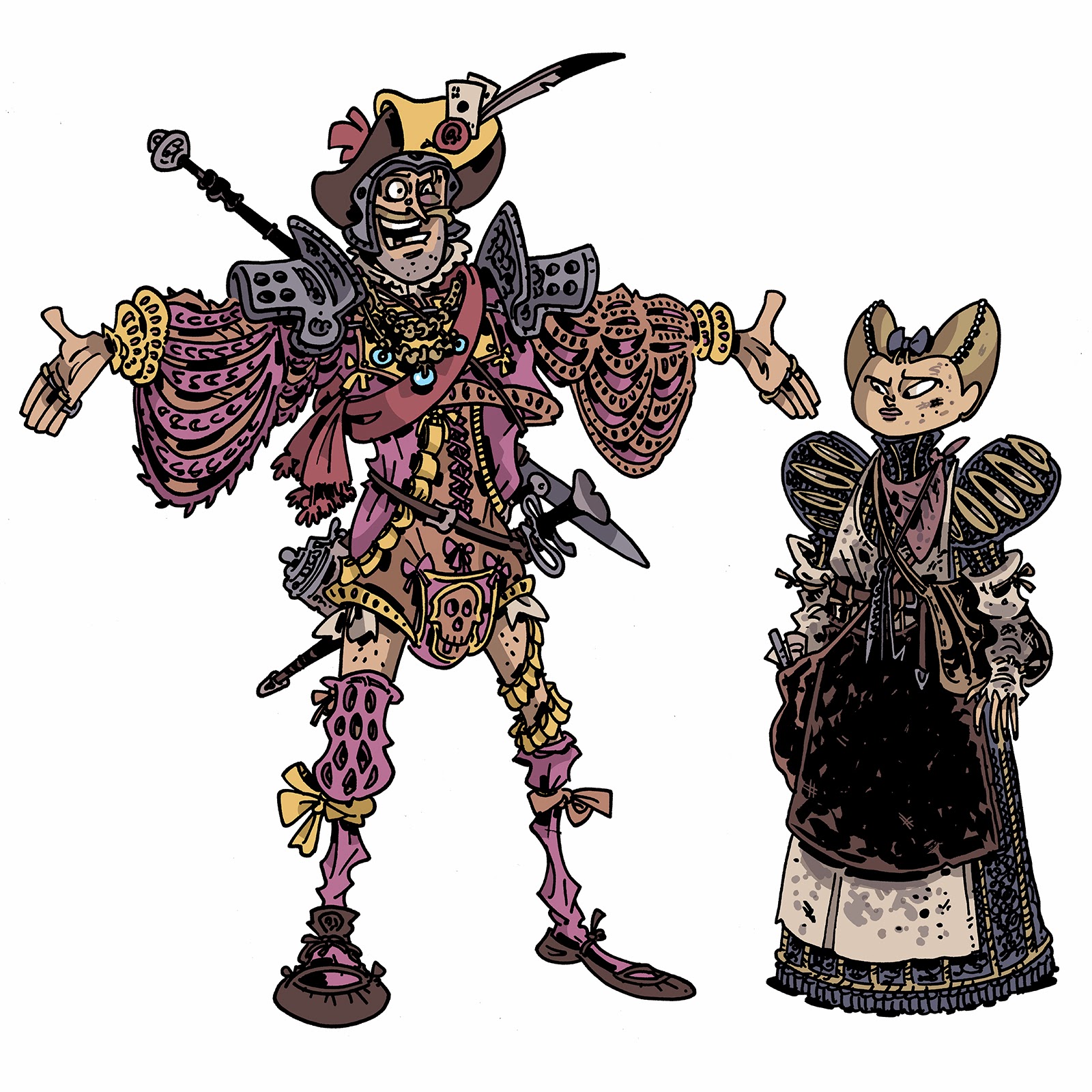 Here’s the next “reveal” for one of the pairs in the new, more complete Crogan family tree: Martin Crogan and Ramona Jinner, circa 1557. Martin is a soldier with a German mercenary regiment (a Landsknecht) fighting in Italy, and Ramona is a gunsmith, doing field repairs on arquebuses and muskets.

(If you're unclear as to what the heck I'm talking about here with the family tree and everything, I have a historical adventure graphic novel series  - The Crogan Adventures - in which each book features a different member of this fictitious family tree, and so each book is a different era, a different genre).
The Landsknechts were given a free pass to ignore the sumptuary laws that basically kept people from showing off by wearing clothes that were too fancy or flashing their wealth around in an obnoxious fashion. And boy, did they. You’ve never seen such gaudiness. So much so that in their early incarnations you’d have like four super-fancy outfits that would be cut up and put together so that you could wear all four at once, quadranted out. The “slashes” in the garments that would later become typical of the period are thought to have originated with the mercenaries looting the fanciest sets of clothes from the cities that they helped to sack and not letting a little thing like those clothes being way too small stand in the way of wearing them. The slashes were initially made anywhere that such clothes were too tight (on the chest, the arms, the joints, across the back, etc). Eventually these flourishes would be incorporated into the initial design of new clothes. Martin here is of that second wave, wearing clothes made to look like the clothes that had been assembled piecemeal.

Ramona is wearing linen sleeves and a linen front smock to protect her dress, and a heavy leather blacksmithing apron over that, and she's wearing her hair in a style semi-popular in Spain during this period, which I punched up a little bit to make it look more like the cat-ears that it already resembled.

I found a few old woodcuts that showed bare legs (or sometimes a single bare leg) on some Landsknechts, and the undershirt poked through like pockets on horrifically high-cut jean cuttoffs, so I made sure to include that. I can't imagine that folks of this era would be any more comfortable around an outfit like this than someone today might, and so I wanted to amp up those cringeworthy elements as much as possible (which also accounts for the embroidered skull on the pink codpiece flap) for both contextual and thematic reasons.

I've also seen plenty of helmets and plenty of hats atop helmet liner caps, but never a hat atop a helmet, which I used here because that just seems like something this guy would do. He also has what I think will be a permanent black eye, like Yao in Mulan.

The original art for these are available for sale.  Each one is 8.5x11," ink on 80# stock, shipped the Tuesday after purchase.  First come, first serve.

Posted by Chris Schweizer at 6:34 PM