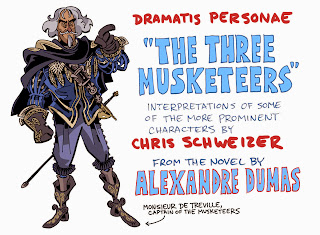 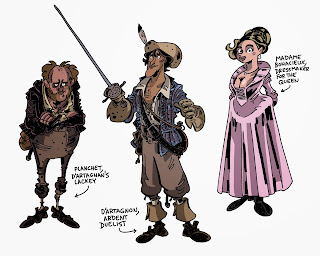 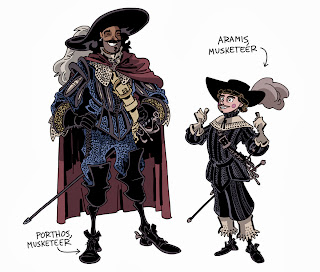 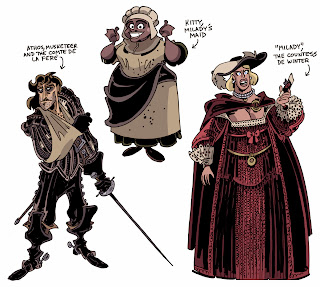 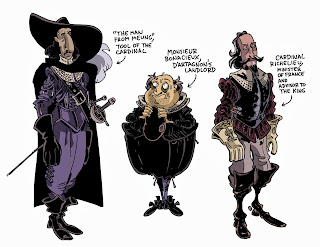 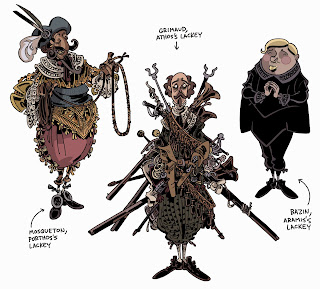 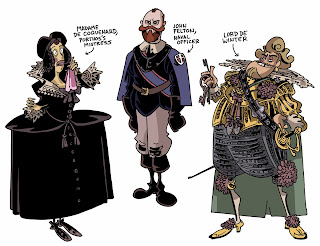 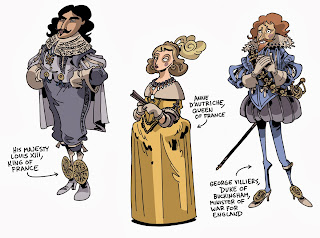 Since I was a kid, I have loved The Three Musketeers.  My introduction to it was the same as my introduction to many other works of classic literature, through comic adaptations (pocket classics) and illustrated abridgements.  I watched many of the many film adaptations (it has been a lucky thing that half a decade rarely passes without either The Three Musketeers or one of its sequels, usually The Man in the Iron Mask, finds its way to the screen).  I felt that I knew the story well, and I did, but I had never read the entirety of the original Dumas novel.  I’d started it many times, but never gotten around to reading more than a third or so.

This was rectified over Christmas, when I read, and thoroughly enjoyed, the Richard Pevear translation, which I found far more captivating than the public domain William Barrow version that has been floating around for a century and a half.

As is my wont, I found myself wanting to draw the characters whenever they and their garments were described.  So I highlighted every physical description given throughout the book as I read, and used those, and my general impressions of the characters, to take a stab at designs.  Some of these were especially fun because of the disconnect between the descriptions and the general casting decisions usually applied to film adaptations.  Milady, for instance, is often played by waifish actresses, but in the prose she is described as quite tall and well-built (which, in the eras of both Dumas AND the Musketeers whose adventures he weaves, means broad and meaty), missing a specific tooth, and with a countenance that puts off palpable vibes of animal fury.  Aramis is described as being downright prissy, and his mannerisms and rosy-cheeked downy countenance seem better suited to Kurt from Glee than Charlie Sheen or Jeremy Irons.  He’s also very young – Aramis is 22 or 23, and Athos, near 30, is the oldest of the group, meaning that Porthos, who is described in the book as very tall but whose iconic burliness is without literary precedent, could be any age older than D’artagnon (20) and younger than Athos.  I put him squarely in the middle, at about 26.  And D’artagnon, though clearly young, is lacking in the softer features usually present on the actors that play him.  Dumas describes him as having “a long, brown face; prominent cheekbones, a token of shrewdness; enormously developed jaw muscles… nose hooked but finely drawn.”

Some folks will likely take issue with my decision to make some of the characters people of color, assuming acquiescence to political correctness over historical accuracy.  But France (and a lot of Western Europe) in the 1620s was a very ethnically diverse place.  As Milady’s servant who carries her pillow to mass is black, it seems just as likely that her maid is, too.  Rochefort (the man from Meung) is described in two different sections of the book as being “dark skinned” and “very pale,” which is difficult to reconcile unless you accept that he is likely light-skinned black.

My favorite characters to draw were my favorite characters in the book, and those were the three musketeers’ lackeys.  Grimaud, who the alcoholic Athos forbids to speak and with whom he only communicates with via looks and the occasional gesture and who, should he misinterpret the meaning of a glance, receives an emotionless beating at the hands of his master, is tragic and hilarious at the same time.  Bazin’s constant disappointment that Aramis is still a thug and not a priest is tragic and hilarious.  Mosqueton, with his lariat and the intimate knowledge of Mexican roping techniques that he uses to lasso bottles of alcohol from cellar windows, is just hilarious.  His origin story is the best of many wonderful anecdotes to be found throughout the book.

Two things that really struck me, so far as characters go.  First, D’artagnon on more than one occasion uses deductive reasoning more than once and with such uncanny ferocity that one would assume that the detective genre was already well codified by the time Dumas laid down his words.  Sometimes it’s determining the identity of a person based on their clothing, manner, physiognomy.  The most striking case, though, is when he forensically analyzes the caliber of a bullet, and by these means who likely fired it, by looking at a hole put into his hat by assassins hired to murder him.  I had a little bit of hope that not much had been written about Dumas’s clear contribution to the field of detective fiction (bear in mind that the passage was written in 1844, and while Poe’s Dupin was in print three years earlier, the deductive methods of Sherlock Holmes have much more in common with our Gascon swordsman than the Frenchman who hears hoofbeats and shouts “Orangatan!” which is just French for “Zebra,” after all), but there are enough essays out there to not bother with writing one myself.

The other point was how darn great a psychological villain Milady is.  She looks at people, figures out their weak spot, and immediately sets about exploiting it – in the case of Felton, turning the most pious, incorruptible man in England into a murderer and making him think it was his own idea.  Hannibal Lecter has nothing on the Countess de Winter.  The most telling and chilling acknowledgement of this is when two of the Lackeys are walking alongside her as guards.  Now, these are men whom their masters, the musketeers, repeatedly entrusted with their lives, so much so that there’s a scene in which each musketeer tries to vigorously explain why his lackey is the most stalwart, the most loyal, the most trustworthy, that he might be the one whom the musketeers entrust with a letter that, should it fall into the wrong hands, would mean death or ruin for many parties.  These guys are beyond any possible reproach.  But as they’re walking, Milady says two sentences to them, inaudible to the musketeers.  Here’s what happens:

Athos, who had heard Milady’s voice, came up quickly, as did Lord de Winter.

“Send these valets away,” he said.  “She has spoken to them; they are no longer trustworthy.”

Let that sink in for a second.  One of these valets is the guy who Athos earlier in the book regarded as the most stalwart and trustworthy of individuals, and Milady having spoken two sentences to him immediately eliminates in Athos’s mind everything we knew about his character.  And you know what?  Athos is right.  She is that good.  That terrifying.  I don’t know that I’ve ever read a character with more potential for menace, save maybe Enomoto in The Thousand Autumns, and Enomoto’s menace arises from his position.  Despite her title, Milady is rags to riches, over and over again – her capacity for manipulation and destruction arises entirely from her own abilities.  And she’s a tragic character, too – save for one instance that must have happened when she was probably twelve or thirteen (based on her age of sixteen sometime later, which is when she married Athos), an event for which she is blamed but whose circumstances outside of the cold facts of the event are a mystery to us, she is operating entirely out of justifiable revenge (unless you count the circumstantial charge of having murdered her English husband).  D’artagnon wrongs her big time, Athos wrongs her big time, and in neither instance is either faulted, though D’artagnon at least recognizes what a terrible thing he did and acknowledges that all of their sufferings and subsequent disenfranchisement with adventurous living was put into motion as a result of that crime.

Anyway, so glad to have finally read it.  I may eventually draw octogenarian lawyer Monsieur De Coquenard in his wheelchair and the scraggly bearded biologist executioner, but I probably won’t.  Time, and all.

I didn’t find out that BBC was making a show until I’d already started on these.  So excited!

The original art for these are available for sale (each character is its own piece).   ALL SOLD OUT!
Posted by Chris Schweizer at 2:20 AM