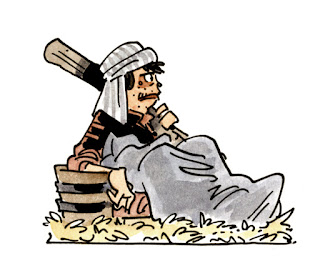 Though I’ve never seen it played this way, I would expect that Mary and Joseph wouldn’t be the only out-of-towners in for the census, and surely not the only ones for whom the inn had no room.  Were I to tackle a Nativity story, I’d make the stable a crowded, dirty, and possibly dangerous place, with lots of folks from all over huddled in against the elements and the dangers presented by sleeping outdoors in an urban environment.  Part of this would be thematic, but it would also be a logical bend to swing.

A small town might be a trusting town when it comes to known neighbors, but with a big influx of strangers even the most welcoming sorts would likely take precautions against the troubles that might accompany anonymity – a stranger who knows not to whom an ox belongs might feel no guilt were he to contemplate stealing that ox from its nameless owner, or so might the owner assume.  To that end, it seems likely that whomever owned or managed the stable might’ve employed a rough-and-tumble teenager to sit watch at night as deterrent to anyone who might make use of Bethlehem’s sudden and temporary population surplus.

I’ve never encountered a stable boy in a Nativity narrative, but that doesn’t mean there oughtn’t be one.  Mine isn't much moved by the events going on; he just wants his shift to be up so he can blow his wages on some rad sandals.
Posted by Chris Schweizer at 11:37 PM