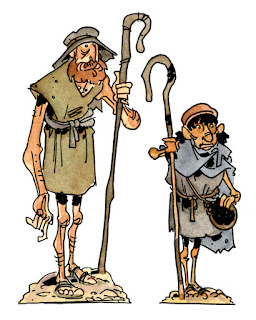 Shepherds, abiding in the field, keeping watch over their flock by night, tell us something important:

Christ’s birth, according to the story told in the Bible, WASN’T in December.

Or, at least, that was the reasoning used by the early Church when they attempted to peg down the likeliest date for Christ’s birth, with most of the notables pushing for a March, April, or May birthday: the lambing season. 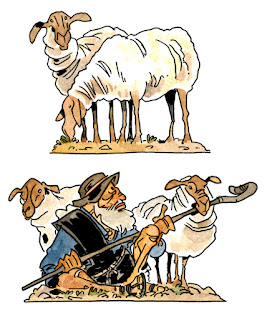 So why the later move to December 25?   The popular theory is that it was a deliberate attempt by the church to co-opt the many pagan festivals that occurred during this time, as many cultures had solstice celebrations when the day was at its shortest.  But while the church DID appropriate those festivals, and while the church would certainly do this on later occasions – Valentine’s Day, for instance – that wasn’t the case with Christmas, just a happy byproduct.  Many of Christmas’s trappings (Trees and greenery, ec) stem from pagan celebratory practices, but the Dec 25 date precedes the Gregorian method of conversion by cultural appropriation, and is rooted in the idea that Jesus’s conception was the same date as his crucifixion, the latter erroneously calculated by the second/third century Christian author Quintus Tertullianus as March 25th.

I’d usually be wary of this theory of the Christmas date motive because when it is proffered it’s mostly by Christians intent on trying to dissociate Christmas from any pagan roots, or, worse, December 25th literalists, and almost any time Christian apologists latch on to a school of thought that supports a theologically rigid but fragile position it’s an immediate red flag on its academic validity (just ‘cause of a terrible, terrible track record).  But the annunciation (conception) argument has one REALLY big thing going for it:

The split in dating between the Eastern and Western churches.

Eastern churches, at least as far back as the mid-300s, have their annunciation and crucifixion dates set not at March 25 but on April 6th/7th, thereby putting their Christmas at January 6th.

I’d lay money that the Eastern crucifixion date precedes the annunciation one, since the crucifixion date has a deductive starting point in the Gospel of John, whereas the annunciation/birth dates are 100% guesswork.  If the Easterners ran the same place-the-annunciation-at-the-crucifixion-date play that the westerners did, and that seems to be the case, then that offers the simple motive of dating Christmas nine months later rather than assigning it to coincide with pagan festivals.

That said, Christmas certainly benefitted from its alignment with existing festivals, using them as a back door for doctrine and worship in the public sphere.

Anyway, back to the shepherds.  Watching their flocks in springtime, probably. 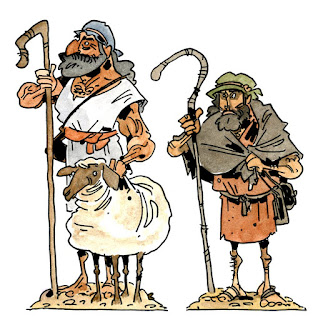 When Penny was two, we got her a Fisher-Price “Little People” Nativity set and I was astounded that it came with no shepherd.  Multiple animals, three kings, an angel, and the Holy Family, but no shepherd.  And that really rubbed me the wrong way.  I can’t imagine that the folks at FP are pushing a theological agenda, but I didn’t care for the message created by the absence.  The only folks on hand in the set to pay liege to the Christ child are kings and an angel of God, the cream of the social crop.  Four “haves”, no “have nots.”

The shepherds, the first to be alerted to lil’ Yesu’s presence, are, to me, an extremely important symbolic element of the Christmas story.  They showcase that Christ’s kingdom is first and foremost for the downtrodden, the meek, the poor, all those folks mentioned in the Sermon on the Mount.  Though there are plenty who jump through theological hurdles to try and disenfranchise the disenfranchised (even with shepherds, I’ve seen suggestions that the shepherds in the story were extra special fancy super-shepherds, in charge of temple sheep intended for sacrifice and therefore of high station in their field and community, not common rabble), populism is central to the Christ narrative and, in my view, the Christian faith.  That shepherds and kings (we’ll get into the kings later) are both humbled and awed by the presence of Jesus puts them on the same footing.  They are made equals (right here in the corporeal world, no less!) by the God-child’s arrival.

As someone who’s placed a lot of emotional stock in fairness since I was a wee one, I love the equalization that the shepherds represent in the narrative.
Posted by Chris Schweizer at 11:26 PM