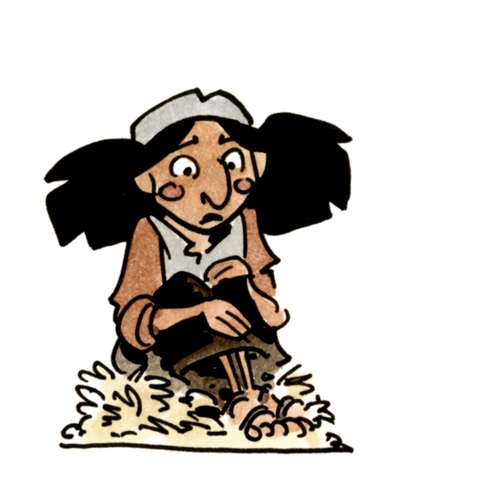 My version of Mary is influenced by The Gospel of the Origin of the Blessed Version and the Childhood of the Savior, now generally known as The Gospel of Psuedo-Matthew, written in the early 7th century for a Christian community clamoring for Jesus prequels, and from the Protevangelium, written about fifty years after the Gospel of Luke was laid down.  Both were important sources for medieval sacred art.

Mary is was the only daughter of Joachim and Anna, two extremely righteous people who found themselves childless in middle age.  Despite his piety and charity, Joachim (much like Job) was suspected of wickedness by his neighbors, here because God had opted to refuse them children.  We see echoes of the many other late-in-life-miraculous pregnancies in the Bible here, as their prayers are answered, and Anna becomes pregnant with Mary.

They dedicate Mary to the temple where she goes to live and serve, but as she nears menstrual age the temple priests start to fret.  She has to leave before she gets her period, which would defile the holy place.  So, with much ceremony to determine a match suitable for such a miraculous child, the priests arrange an engagement between twelve-year-old Mary and Joseph, at whose home she goes to live until she reaches fourteen, at which point their marriage will be consummated.

Now we get to the canonical Gospels, and Mary receives word from the angel Gabriel that she will be with child from the Holy Spirit.

Her soul doth magnify the Lord, yeah, but she’s also barely a teenager and I expect that the attention of the visitors is a little overwhelming, so I drew her curled up, trying to process the magnitude of the whole thing.

Posted by Chris Schweizer at 5:24 AM