Over the next month, I'll be offering thoughts on the Nativity set model (a large papercraft crèche that you can find and download here:
https://gumroad.com/l/ThkR 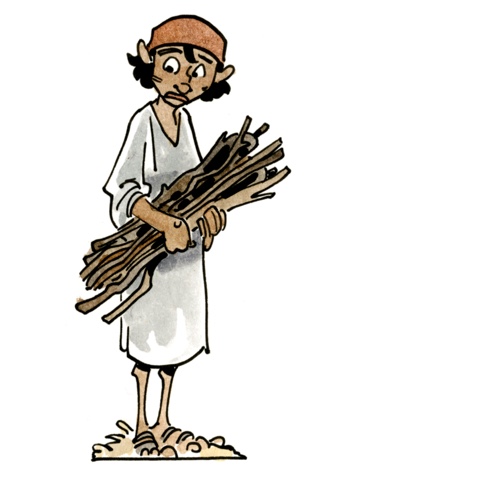 James, as depicted here, is Joseph’s youngest biological son, still part of his household, and, as such, likely to have traveled with them to Bethlehem.  I have him gathering firewood, as I assume he’d have been the one to run errands, get food, etc, as Joseph stayed near Mary for the sake of both safety and propriety.

In church and narrative tradition, James serves as a counter to Paul in the early church, treating Christianity not as a new religion but as a sect within Judaism.  He and Paul are at odds over whether Christ’s message is for the Jews or for the entire world.  The apostle Peter serves as their negotiator, espousing a middle path of compromise.  James, in a dual role a high priest of the temple AND a bishop of the early Christian church (not, at the time, conflicting stations) serves as a kind of Chief Justice for early church decisions, and accepts Paul’s dogma-shattering recommendation that gentile converts needn’t behave according to Jewish social contract, but with the caveat that certain other behavioral law be implemented.

It’s James, I think, from whom we get the legalistic tradition of Christianity, at least symbolically.  Sure, any religion is going to codify behavioral principles over time, but James’ influence directly steers the notion of distinct cultures maintaining their practices in full while still converting to this new faith into what we instead eventually get, which is the desire on the part of the church that the faithful homogenize into the existing Christian culture.  I don’t know if this is a widely-held view, or if it’s held at all, but it’s my take on the fella.

Posted by Chris Schweizer at 5:47 AM