Over the next month, I'll be offering thoughts on the Nativity set

model, a large papercraft crèche that you can find and download here: 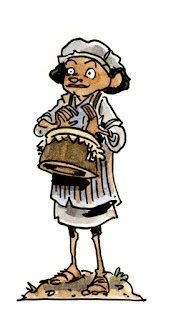 The message of the carol “The Little Drummer Boy” is a good one: let each person make gifts of his or her means or talent, however meager.

Its single accolade upheld, I can now dwell on how much I dislike this song.  For me, it’s likely a mix of irritation as a listener (it’s SO boring and repetitive and dirgey) and frustration as a singer (as a bass, any choir I was in that performed it saw those of us on the low register relegated to the endless and identical onomatopoeia).  In either instance, my time would have been better served doing literally anything else on the planet.  Come on, choir, get a drummer.  Heck, even beat-box if you really, really need vocal percussion.  That pa-rum-pum-pum-pum needn’t double the song’s length.

I’m not alone in my contempt for this song.  I’ve many a friendship whose bond has strengthened in our mutual dislike.  David Bowie’s “Peace on Earth” was written for his duet with Bing Crosby because he famously refused to sing such obnoxious drivel.  So why is this song so terrible?

Well, it’s NOT terrible when it’s used for its intended purpose: children’s amateur choral performances.  It’s a deliberately simple and repetitive song crafted specifically by its composer, the great and prolific music educator Katherine K. Davis, for youngsters whose musical and cognitive abilities don’t yet permit greater strain.  And, so far as an elementary-age choir piece goes, it’s fine.  But it shouldn’t be sung by adults without drastic alteration to the arrangement (which the song rarely, if ever, sees).  It’s the Christmas equivalent of “Head, Shoulders, Knees, and Toes.”

So despite how much I dislike the song, it’s not the song itself that I dislike, but the purpose to which it’s been turned.

A similar song, but far more interesting in its complexity, is “Patapan”, a 300 year-old French carol which also has vocal instrumentation AND the central character of a little drummer boy (his name is Willie).

SO!  You’ve been tricked.  The little drummer boy in the Nativity set is actually Willie of “Patapan” fame.  Bwahahaha!  I guess he could still be the kid from the other song, too.  Santa has eight gazillion songs about him, drummer Willie can certainly have two.


SO!  You’ve been tricked.  The little drummer boy in the Nativity set is actually Willie of “Patapan” fame.  Bwahahaha!  I guess he could still be the kid from the other song, too.  Santa has eight gazillion songs about him, drummer Willie can certainly have two.
Posted by Chris Schweizer at 11:17 PM