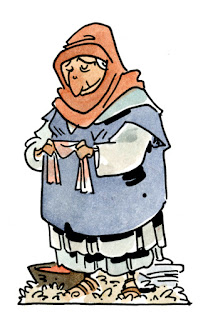 The midwife appears in the apocryphal mid-2nd century Gospel of James, as well as a variety of other non-canonical books that likely used James as one of their sources for nativity stories.

In the story, Mary goes into labor and Joseph leaves her with his sons (plural, which I missed earlier; I ought to have included at least one more in the set.  Whoops!) in the cave to find a Hebrew midwife.  He comes across one walking (the first woman he sees, luckily), and they race to the cave.  Joseph is pretty darn open about the whole conceived-by-the-Holy-Spirit thing, laying all his business out without much prodding, and the midwife seems dubious until they get to the cave and Mary’s nethers are all aglow, lighting up the cave.

The midwife is understandably awed by glowbaby Jesus and the story told by Joseph, and runs to spread the news to some close friends.

When I was in early college I stumbled across the Gospel of James and was floored by it, mostly because, so far as Jesus fan-fiction goes, it's pretty solid, filling in a lot of the gaps in the canonical gospels, satisfying genre conventions (annunciation of pregnancy to an old but pious couple, etc), and, most of all, adding elements that gave it an earthy and ancient realness (the stable being a cave, for instance, and the logistical necessity of a midwife).  I copied it longhand in order to help with memorization.  For some reason, who knows what, I thought it would be a worthwhile thing to be able to recall.
Posted by Chris Schweizer at 10:08 PM