Today's pulp character is The Rocketeer.  I penciled about five different helmetless versions of him because really the Rocketeer is just Cliff Secord in a cool helmet, but I just couldn't get the fun and the emotional impact that comes from seeing that cool helmet, so I ended up going that route.  I also drew the comic rocket pack, even though I like the movie version more. 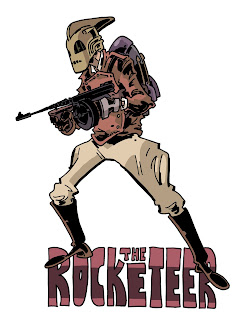 The Rocketeer was the first movie that I was really conscious about wanting to see well before it was out.  I counted down the days to June 21st (the release date is burned permanently into my memory), and fell in love with it.  It was a growing up moment, too - the first time I realized that a bad guy could be WAY more charismatic than a good guy (it didn't matter how well Campbell carried his role; nobody could compete with Timothy Dalton in my favorite of his many wonderful performances) and the first time that I really noticed that breasts might be worth paying attention to by way of Jennifer Connelly, a childhood crush that has remained intact throughout adulthood.

I immediately made my own rocket pack from two three-liter soda bottles duct-taped together and wrapped in aluminum foil (try it, kids!).

So I loved the movie (and a few short comics that ran in Disney Adventures), discovered the Dave Stephens comics in high school, and loved those, too.  I couldn't have been more pleased with IDW's choice for their first artists' edition, which I picked up as soon as I saw it.

So I love the movie, and I love the Stephens' comics.  But do you know what I like just as much?

The Mark Waid/Chris Samnee/Jordi Bellaire miniseries Rocketeer: Cargo of Doom, which is available in a nice hardcover with all of Samnee's pencil roughs reprinted in the back.

It's no secret that I'm nuts for Samnee's art, and I've never seen his work look better in color than it does here, with Bellaire's hard cuts.  And Waid pulls off a master storytelling stroke with the introduction of Peevy's neice, Sally.

One of the only areas of the Rocketeer that never resonated with me was the Betty stuff.  I've never found high-maintenance gals remotely attractive (since I was a kid, I've been unable to divorce looks from personality), and relationships that seem a struggle to make work from the getgo (fictitious or otherwise) seem like exercises in futility to me.  I'm in the come-on-Johnny-Rico, why-are-you-chasing-after-Denise-Richards-when-Dina-Meyer-totally-loves-you school.  What Waid does in Cargo of Doom is introduce a well-executed Betty/Veronica dynamic without it ever feeling expoitative.  By putting Betty on the relationship defensive, he makes those of us who never gave a flip care about the success of their romance, and he also gives us a viable romantic alternative, though Cliff never sees her as such (a good thing, given that the age difference would put a sheen of sleaziness on it that, to be fair, would not be out of place in the original comics).

Also, dinosaurs!  Seriously, check it out.  And if you haven't seen the movie, you're in for a treat.


The original art for this one is available for sale.  8.5x11," ink on 80# stock, shipped the Tuesday after purchase.  First come, first serve.
SOLD!
Posted by Chris Schweizer at 8:23 AM