I made a New Year’s Resolution this year. 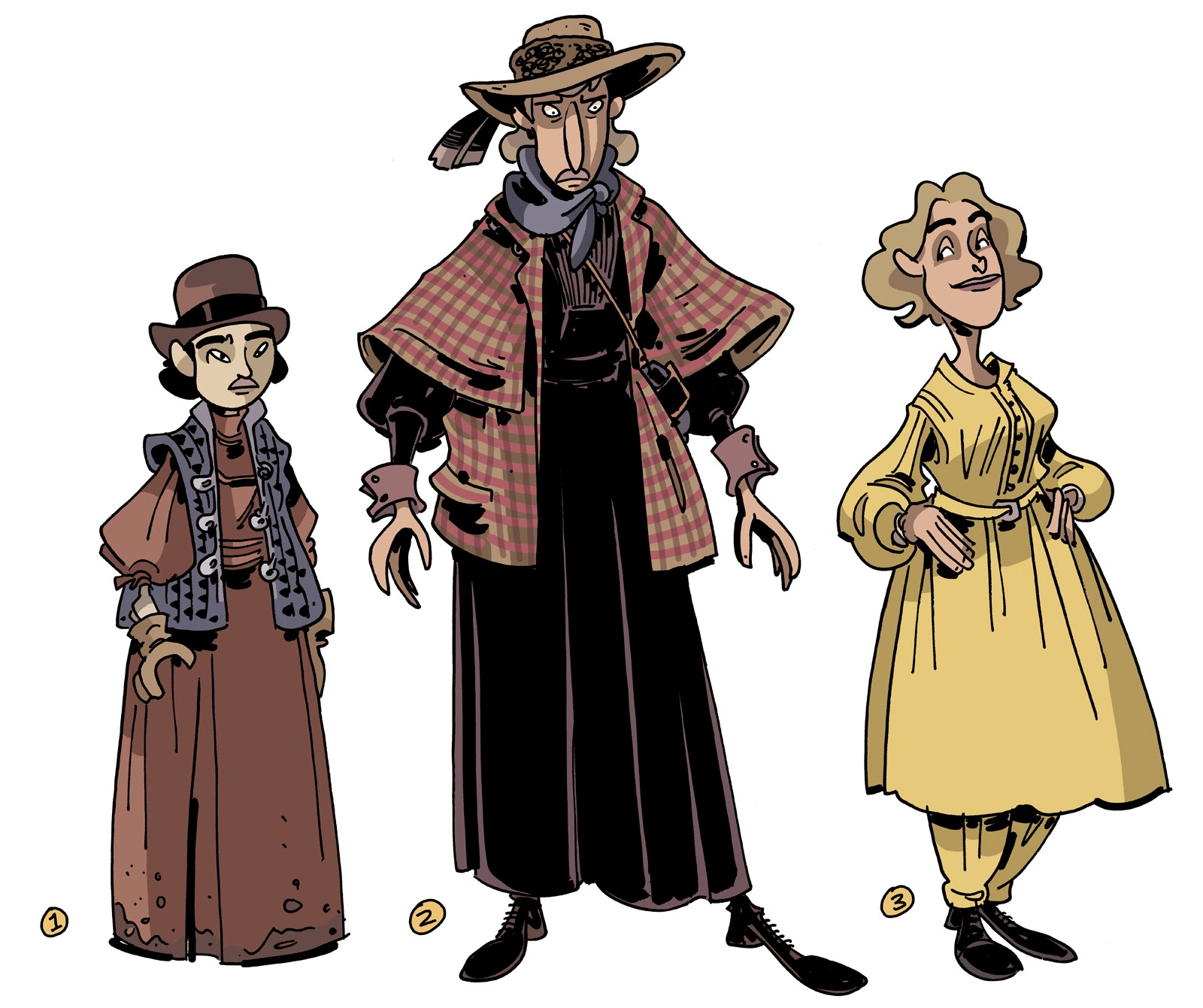 I don’t usually do that.  If I find there to be a deficiency in my character (such discoveries occur with far more frequency than I would prefer), I try to put into motion whatever steps are needed to correct my misalignment then and there rather than wait for the calendar to roll-over.  Waiting seems contrary to growth, and besides, I find faults too often to give one favor over the others by enshrining it in ceremony. 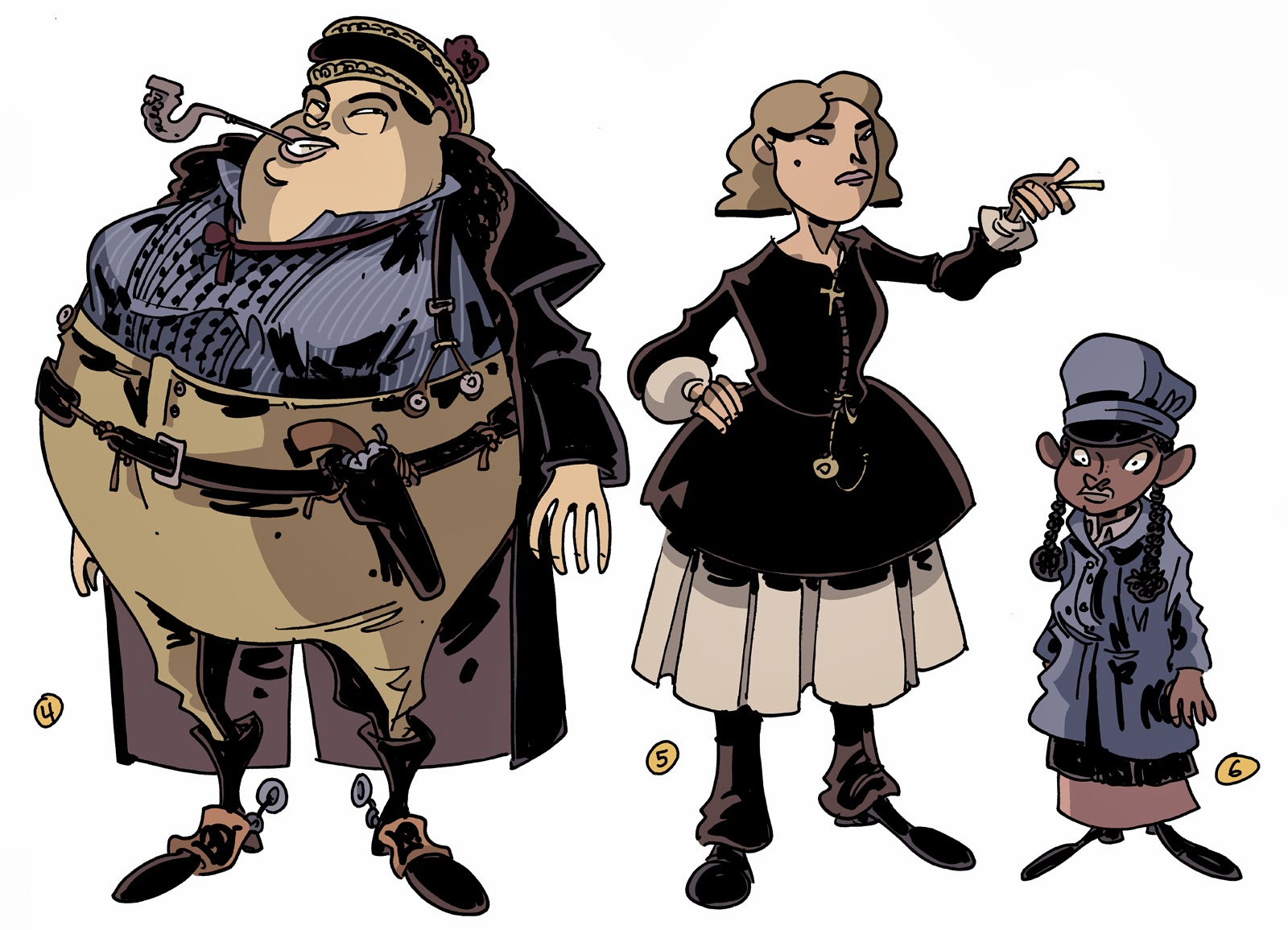 This year is a little different, mostly because the discovery of fault (part of a larger issue that I’m trying to work through concerning how I handle characters in my comics) coincided with the end of December.  And the fault is this: I am daunted by and suck at designing costumes for women rooted in any given specific historical and regional setting.
Just how do I suck at it?  There are a few ways, and they’re best examined by noting the discrepancies between how I handle drawing female characters and how I handle drawing male ones.

* I should mention that this particular issue relates to off-the-cuff drawings for the sake of doing drawings, not characters in any particular stories, although I have no doubt that my inadequacies in one arena carry over to the other.

First, occupation.  Unless the people that I’m drawing are part of a story, in which a breadth of social variety is necessitated by the narrative, I tend to draw men in an adventury role.  A sword, a pistol, a pith helmet – something denotes their inclination to action.  When I draw women, however, I have, until this month, not put adventure at the forefront of my depictions, and as such precious few of my drawings of female characters give such an impression.

In the execution of story itself, I’ve been lucky – kind of – with the book on which I’m currently working.  Two of the best characters are very adventure-leaning women, but this was not by design, it was a lucky stumble.  But with the male characters, it’s nearly always the case, at least when sketching willy-nilly. 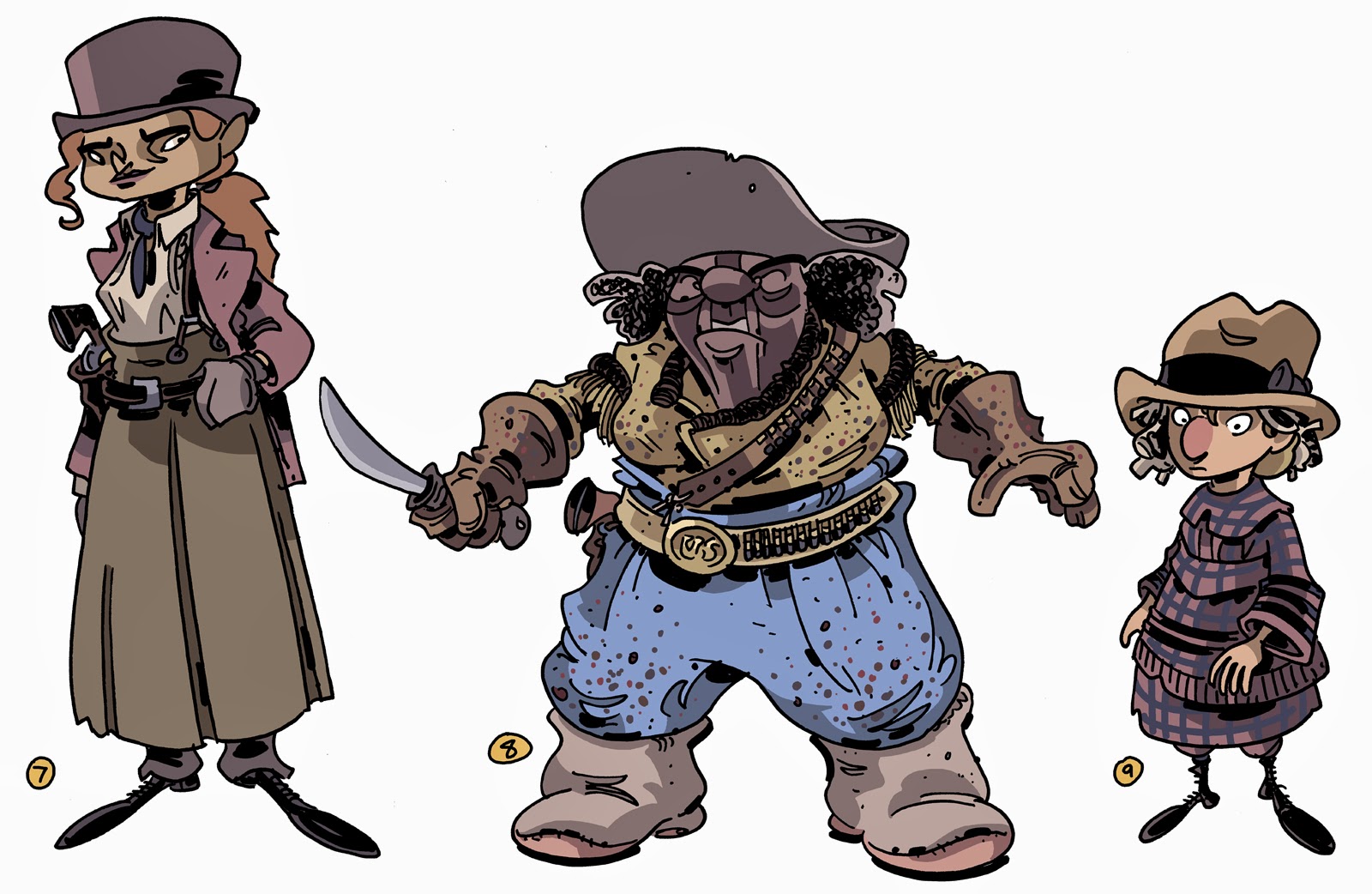 Second, the degree to which dress is customized.  Now, I like to think that, for all my artistic faults, laziness of design is not a charge against which I can likely stand accused (though my confidence in that field likely means that I’m probably due for a kick in the pants any time now).  I always try to customize costume if I can do so, and so any dress or costume that I see will have some degree of alteration under my pen.  The color will change, or the cut, or I’ll take elements from two or three similar outfits and interwork them.  But with men, I’ll go nuts.  Tucking a vest into pants under suspenders, a military uniform jacket with a sarong, an unusual hat blocking, blankets tied to boots, shirts unbuttoned, shirts buttoned absurdly high, etc.  I try and treat each outfit as if it’s a catholic school uniform and see what I can do to deviate as much as possible from its intended mode of wear to a statement on the wearer. 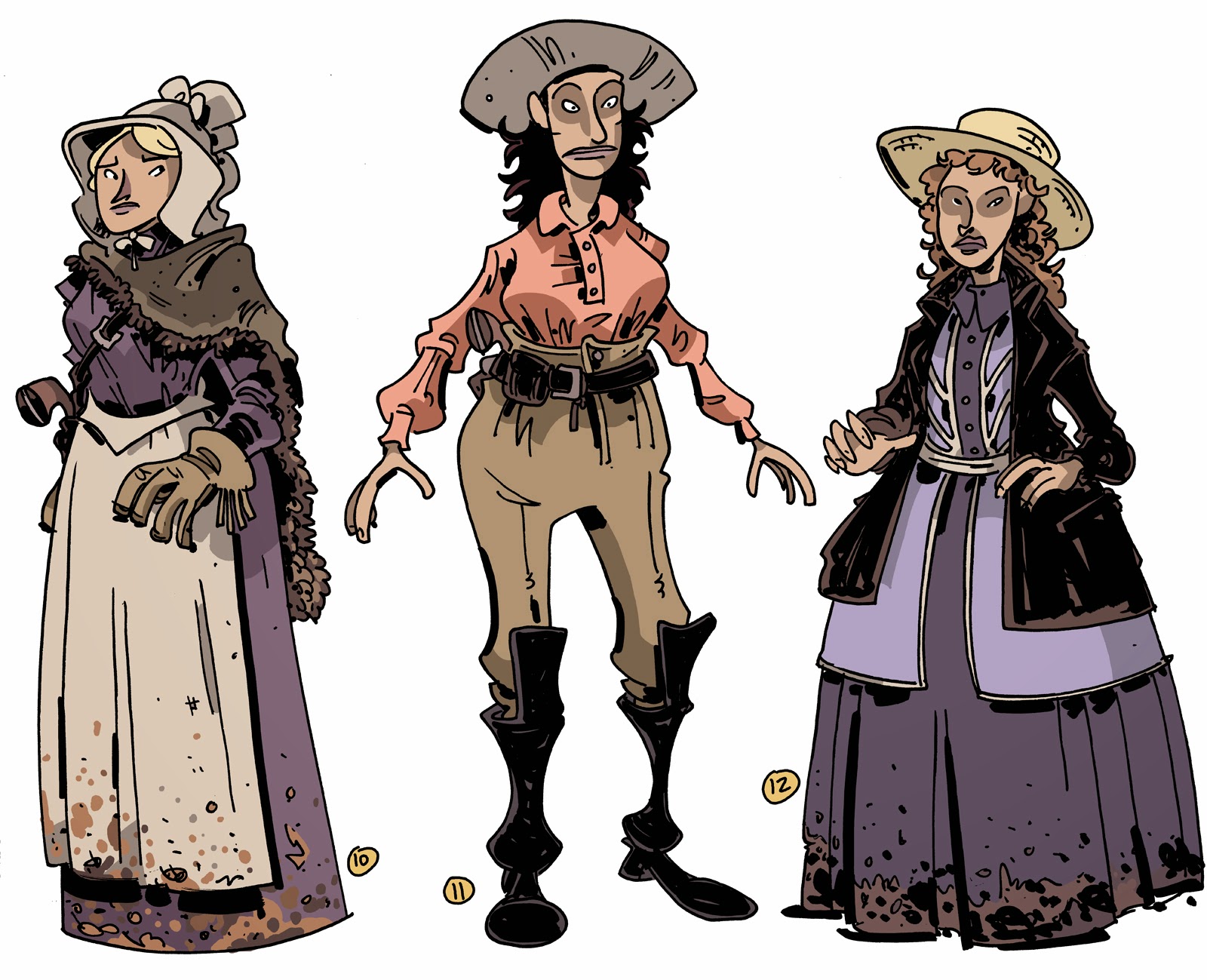 But I don’t, or haven’t, done this for female characters.

Part of this is that the fashion history books that I have generally show fancy clothes in full regalia.  Not having a clear awareness of how the clothes are worn, layered, etc (easier to consider with men’s clothes, generally as the layering of garments has shown little change in the past half-millennium, the garments themselves being variations on that which we still wear), I have always gone to the default, formal wearing.

Now this gets into something else – the dichotomy between easy access to depictions of the rich in portraiture and preserved clothing and the inaccessibility of depictions of peasant and lower class dress – but that’s something I’ve wrestled with before without too much difficulty.  And this is not the issue, though it may seem so on the surface.  Men’s dress, too, has a certain haughtiness in its depiction, but that hasn’t stopped me from scuffin’ it up.  The “nicer” womens’ dresses of a historical period are no less modular than their masculine counterparts, you just see it less frequently (or at least I have).
So what you get is a shocking conservatism of design on my end when it comes to female costume, an adherence to which I always, consciously and unconsciously, placed at the doorstep of historical plausibility.  But, if anything, these regimented depictions are more implausible than their modular alternative, and are a result not of accuracy but of laziness in the research phase, and, more troubling, of research carried out with preconceptions at its onset, preconceptions disinterested with finding adventure-geared manifestations of traditional dress, or untraditional dress on record.
Which leads me to my resolution.  I had to train myself to consider the customization of wear with men’s fashion, and now it’s a part of my artistic DNA, I suppose, though I still put conscious thought to it.  I should say that it is always a question that I ask myself in the design stage.  So let’ say “takeoff checklist” rather than DNA, as it’s not so ingrained as to forgive dismissal (though, to be fair, no segment of the artistic process should really be permitted to rely entirely on autopilot without at least glancing at the instruments, if I might extend the metaphor).  I want to train myself to do the same with women’s costume.  And the only way to train is through practice. 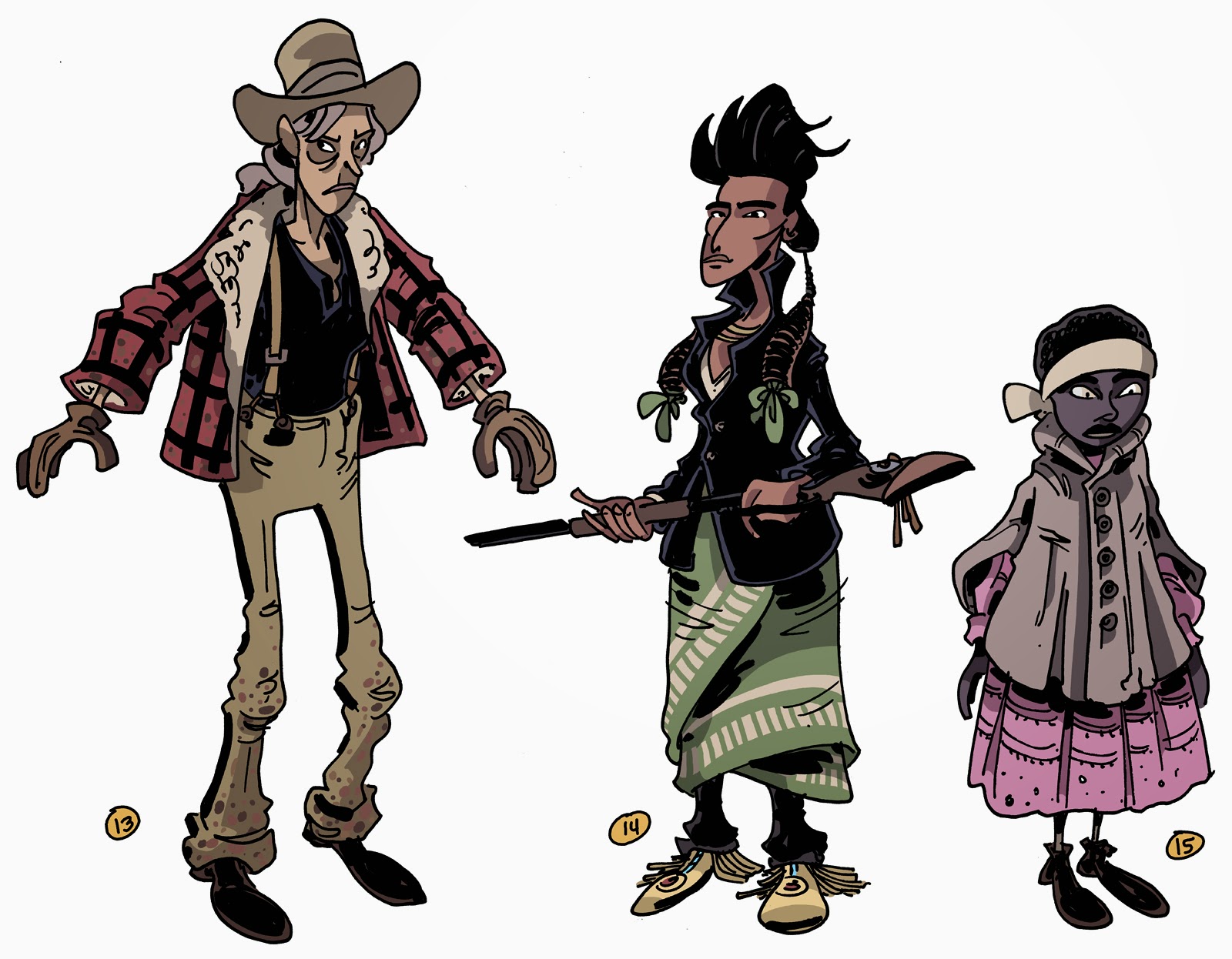 So my resolution is this: That I draw at least as many females when sketching and doing up figures as I do males.

That may not sound like much of an undertaking, but seriously, 95% of the people that I draw out of my head for the fun of it are male.  So I’m woefully ill-prepared to handle the casual design aspects of female characters simply by virtue of not having put in the hours. 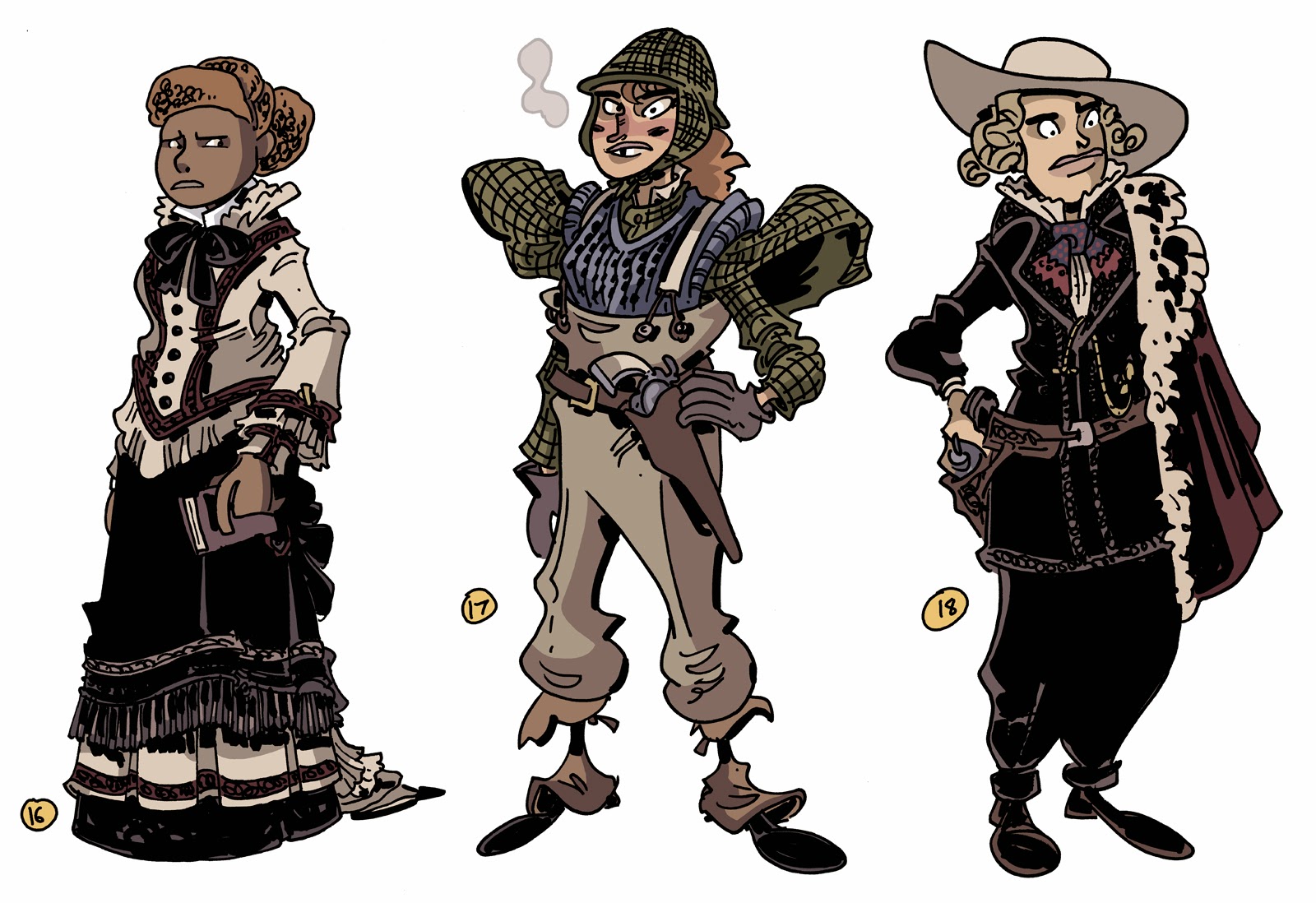 So I spent yesterday and part of the day before drawing up a bunch of female characters specific to one historical/regional period.  For the sake of convenience, I picked the Wild West, as I already feel I have enough familiarity with the trappings as to allow me a head start so far as holsters and boots are concerned. 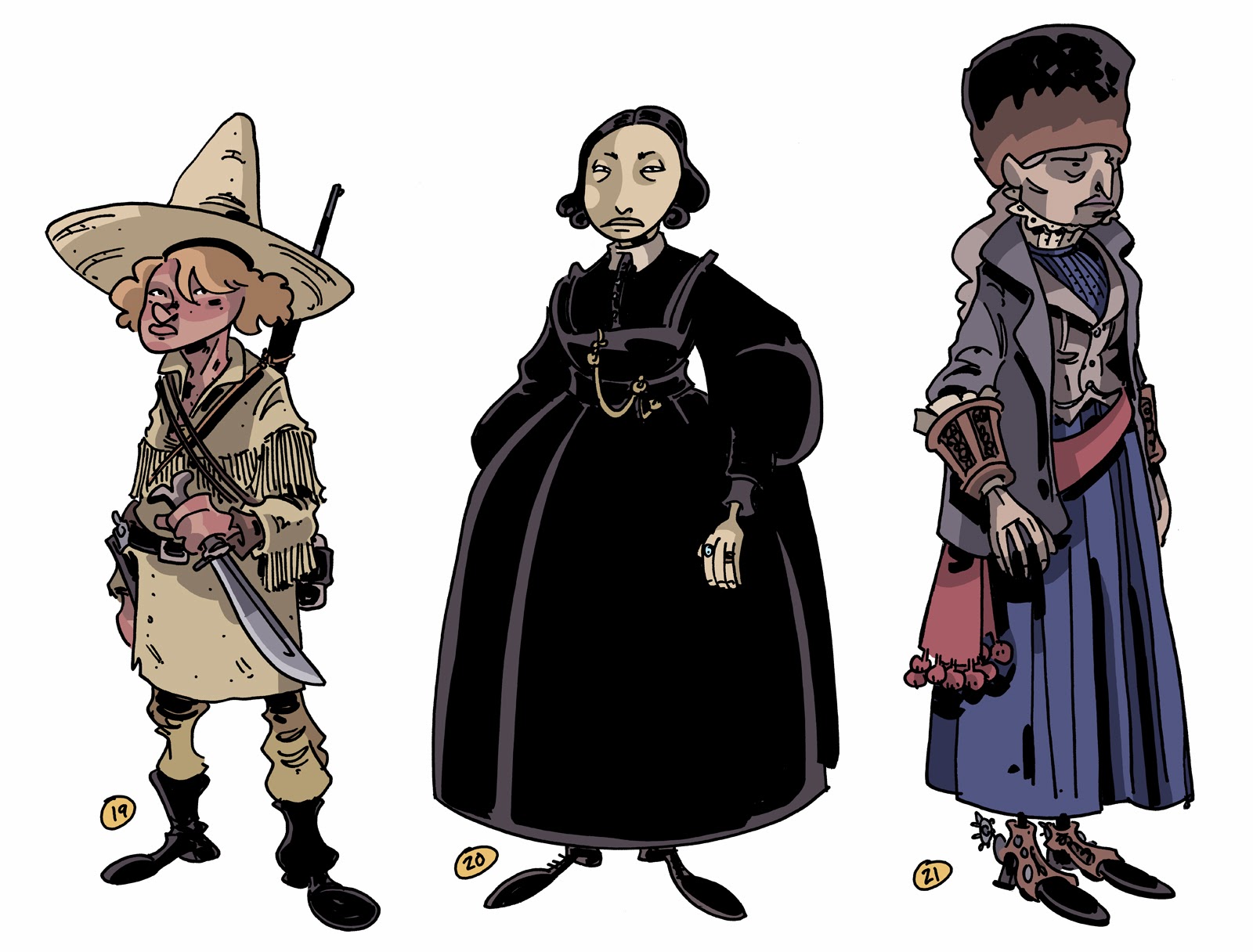 I actively decided to stay away from the most overused trope in female costuming in the west, the saloon girl.  I did, however, include one, because I found some photos so far removed from the popular conception of the saloon girl costume and so delightfully awkward that I couldn’t resist taking a shot at it through that lens (fig. 26).  I also tried to stay away from the Man With No Name costume and its many variants.  As much as I love those characters in the Leone movies (and, unless you’re looking at it through a strictly thematic non-literal lense, they are different charaters), putting a character in that costume or a variation on it (as you see in lots of comics, video games, and low-budget western films) is pure, unadulterated laziness.  Its casualness makes it no less iconic than Darth Vader’s armor, and putting on a character (including a female character) is no different than making a lady Darth Vader and trying to cram it into a non-Star Wars space opera. 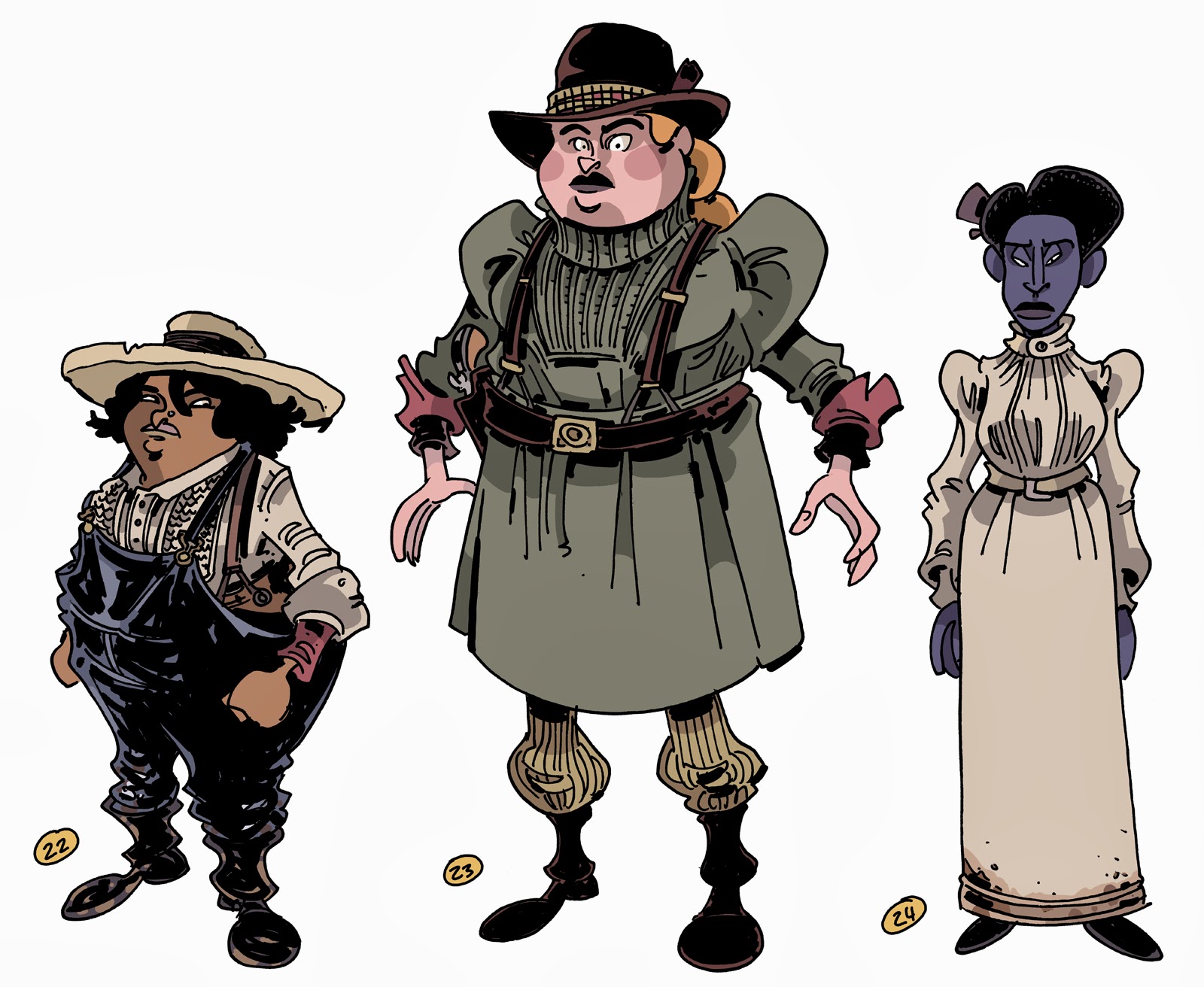 The pants/skirts combo thing is something that was popularized by the Dress Reform movement of the 1850s.  Often the pants would be made from the material cut from the bottom of the dress.  The photos are pretty darn cool, and the ferocity of the caricatures pertaining to them are kind of infuriating, mostly because the punchline is inevitably the dress reform woman in old age, alone and unloved, reverting to an overtly feminine dress in a too-late attempt to catch a man.  Anyway, I’ll do some scans of some of some Dress Reform photos sometime, because they’re really quite fascinating. One of my favorite discoveries was not a dress reform issue at all, but a photo of a woman in the Klondike wearing suspenders over a sweater vest over an Inverness cape, which I used as the basis for fig. 17, only I added a deerstalker and made the cape Holmesian plaid.

The Western period is luckily recent enough, and well documented enough during its existence, as to yield up any number of female participants in a variety of occupations.  Some of these specific instances (including the buffalo skinner [fig. 8] and the buckskinned scout [fig 19]) informed or inspired some of these drawings. 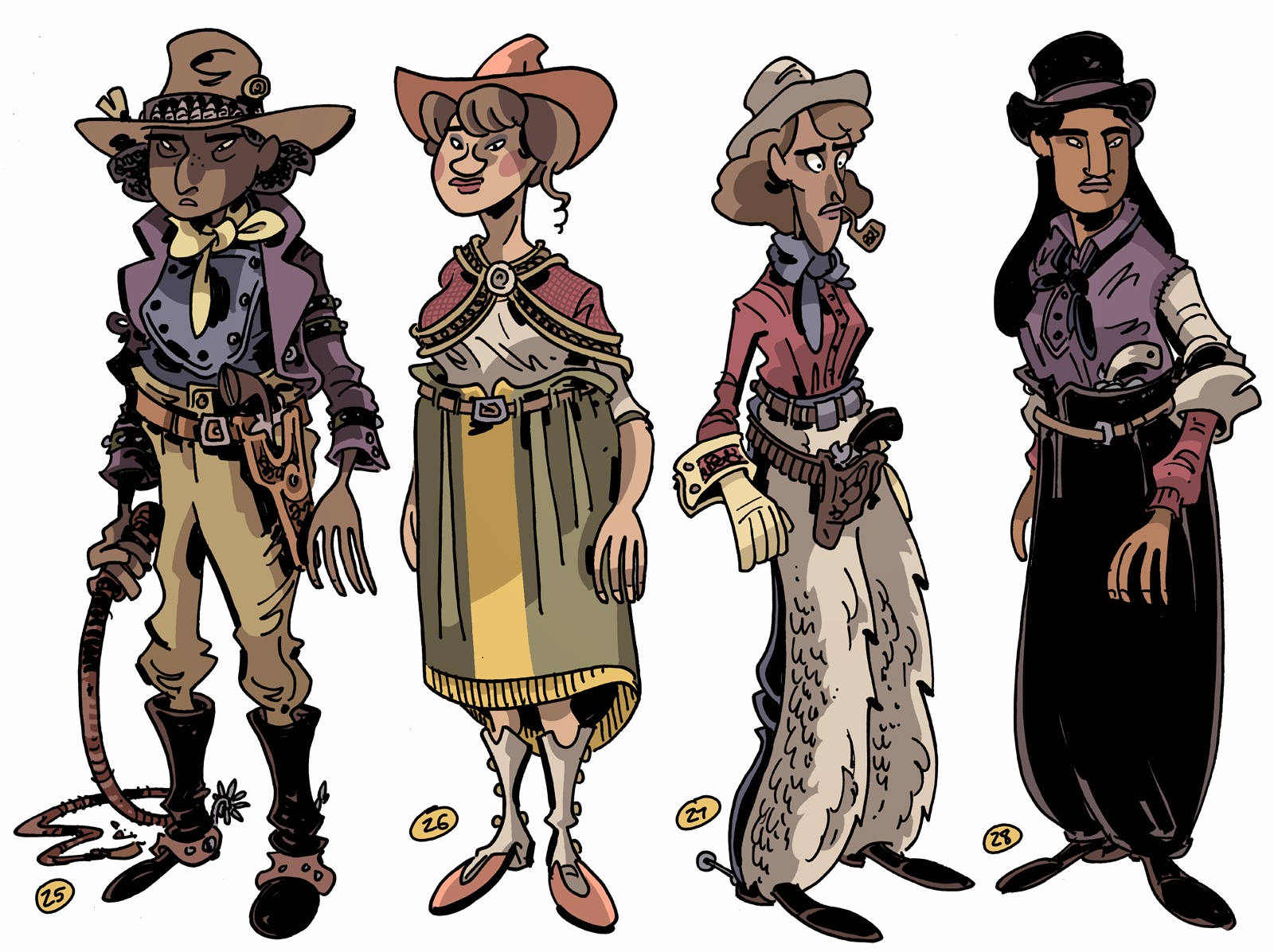 Anyway, my practice is underway.  Hopefully, after a year’s time, I’ll be equally inclined to depicting either gender, and as I no longer feel myself any more beholden to drawing women in boring roles than I do drawing a male medieval accountant or candlemaker (though that sort of thing will probably be next year’s resolution), I’ll be equally enthusiastic.  Given the fixed start date and the notion that this is, in fact, quantifiable, it'll be easy enough to chart my adherence to said resolution.


The original art for these are available for sale (each character is its own piece).  8.5x11," ink on 80# stock, shipped the Tuesday after purchase.  First come, first serve.  PLEASE INCLUDE A NOTE NAMING THE CHARACTER THAT YOU WANT (in this case, there are numbers alongside the figures to make such things easier).  I will mark which ones are sold as soon as I'm able to do so.

Posted by Chris Schweizer at 6:45 AM